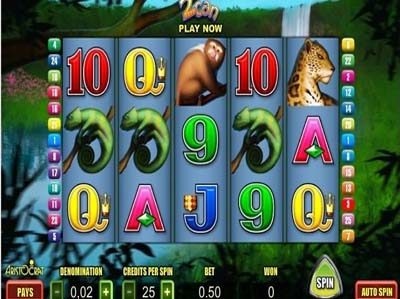 2Can is a uniquely intriguing game that includes tropical animals on its reels, including Capuchin monkeys, chameleons, brightly-coloured frogs, and leopards. You also get a beautiful background to play against, which features a toucan, trees, green leaves and fields. It has a standard set of graphics and animations, and alongside the various animals that are included in the game, standard slot game icons are also incorporated, such as A, J, 9 and 10.

The interface includes five reels and three rows, while a total of 25 paylines are able to be wagered on. Artistocrat have also made it possible for a minimum coin value of £0.02 to be utilised, while a maximum value of £5.00 can be assigned. The maximum amount of coins available to play per line stands at five, meaning that the maximum overall wager that players can place is £125 per spin.

The icon of the toucan acts as the game’s wild symbol, and this will substitute for other symbols on the reels to make a winning combination, except for the scatter icon.

And speaking of which, the scatter icon is represented by the vibrant purple flower. This pays in any position, while three or more of these trigger the freespins feature. A total of 10 freespins will be awarded for three scatters, 15 freespins for four freespins and 20 freespins are offered for five scatter icons. During the freespins round, each toucan icon that appears awards an additional wild icon.

2Can doesn’t have a huge amount of features to it, although it is animated enough to provide a visually appealing game. The freespins with extra wilds feature is a great addition, and the setting of the game is nicely done.