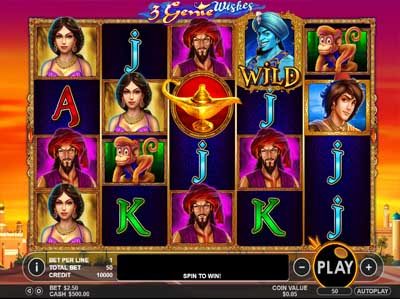 3 Genie Wishes is a slot game based on the famous character of Aladdin and the magic lamp. The slot is brought to us by game manufacturer Pragmatic Play and is actually not the only one by this provider that shares the same theme. As opposed to Aladdin’s Treasure – the other similar game, which focuses on Aladdin – this game centers on the Genie. You will still get to see all the main characters, including Aladdin, Jafar and Princess Jasmine, and of course the Genie himself. In addition, we will also get to see Aladdin’s cute pet monkey and friend Abu. The backdrop showcases an Arabian sunrise over dome rooftops and the soundtrack is a matching Arabian theme.

There are 5 reels and 4 rows, with a total of 50 paylines. Players will not be able to adjust the number of paylines, however, they can set the coin value and bet per line to their satisfactions. Thus, betting amounts can range from 50p to a maximum of £250 per spin. In addition, the game boasts a theoretical RTP of 96.53%.

As this slot game bears the Genie in its title, it’s only logical that the blue wish-granting entity will be the game’s Wild symbol. The Genie can appear stacked on the reels and can appear on any position. Aside from being the highest paying symbol on the reels, he also has the capacity of replacing any of the regular symbols to help create winning sequences. However, this does not apply to the Scatter symbol.

It, in turn, comes in the shape of the magic lamp and can appear on reels 1, 3 and 5. You will be seeking to land all three symbols at the same time to trigger the Bonus feature. Once this happens, this Genie will provide you with a selection of three items: an urn, a sack and a treasure chest. You will need to pick one to reveal your reward. The possible prizes include a payout that is equal to your total stake. You can also win a prize of 10x up to 500x your total stake amount. Another possibility is winning 10 freespins with Raining Wilds, meaning Wilds will be added to the reels during each spin.

Last but not least is the option of winning 6 freespins with Sticky Wilds. During each spin, Wilds will randomly appear on the reels. Once they land, they will remain stuck on the reels until the feature ends. Unfortunately, however, this bonus feature is not subject to retriggering.

3 Genie Wishes is a visually pleasing slot game, with very decent graphics. However, the slot lacks variety in bonus features, which may put some players off. This slot lands in the medium variance range, so there is potential for winning some satisfying prizes.