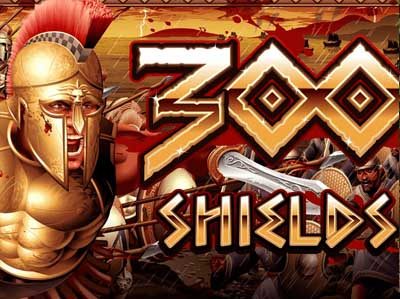 Hugely popular and definitely a player favorite, 300 Shields is an online slot created by Nextgen Gaming. It has a distinct Greek, or more accurately Spartan, feel to it and quite obviously its focal point is the mighty warriors of that region and era. There’s much to like about 300 Shields, including the design and overall quality of the visuals. Sure, they’re not as flashy some very new slot titles out there, but this slot wasn’t released just yesterday either. The backdrop depicts wheat fields, swaying under the influence of the wind. And beyond the fields you have mountains on the one side, and an ancient temple on the other. You can see that the sun is also about to set, sinking behind the temple. There’s a pretty dramatic soundtrack playing in the background, too. So it will be sure to set the right mood for gameplay. 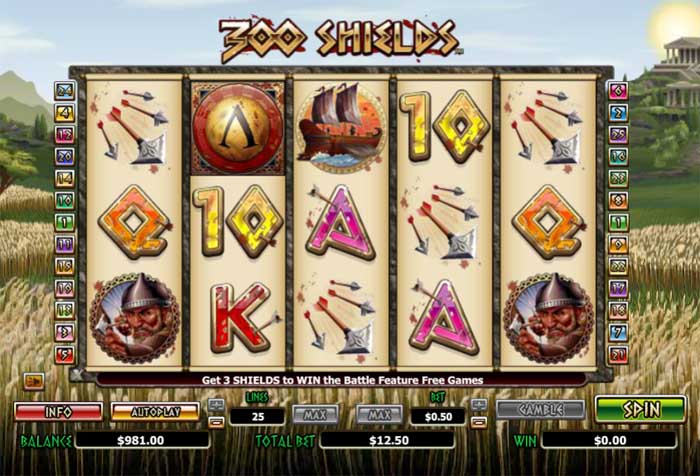 As for the symbols on these reels, they take off with the usual playing cards. These are nicely styled to mimic Greek script and fit with the theme in that each has an arrow sticking out of it. The symbols in question are A, K, Q, J, 10 and 9. Traditionally, each also sports a different color. Next we have the four higher value thematic icons. First is a series of arrows that have been fired and are on their way to reach their targets. Then there’s a rather massive short sword. And at last we see a symbol depicting a battle ship, and one picturing an archer. These last two are the most lucrative of the regular symbols. As for the layout, it features your common 5 reel by 3 row grid. There are 25 paylines available in total, whereas you are free to adjust them as you see fit. Betting amounts are also within reason. If you choose to play with all paylines, stakes range from 25p per spin up to £12.50 per single spin. The theoretical slot RTP isn’t at all too high, though, and is at the 95.3% mark.

First off, allow us to introduce the warrior releasing a fierce battle cry – he is the game’s Wild symbol. As such, he will have the capacity to substitute for any of the other symbols on these reels. And in doing so, the Wild will help complete winning combinations and better your winnings. On top of that, the Wild also happens to be the ultimate highest paying symbol in 300 Shields. As a matter of fact, with its help players can pocket up to an impressive 1,000 coins. The Wild symbol can land in any position, anywhere on the five reels. However, there is one symbol that it will not be able to replace and that is the game’s Scatter.

Free spins with up to 300x multiplier

The Scatter, in turn, depicts a shield and isn’t anywhere near as lucrative as its Wild counterpart. However, it will be responsible for triggering this slot’s Battle Bonus feature. This is a freespins round, which you can activate by landing 3 or more Scatter symbols simultaneously during the same spin. These don’t necessarily need to be on a payline, just anywhere on the screen will do. As a result of this, you will receive a total of 5 initial freespins. During this bonus rounds, all Wild winnings will be subject to a 2x multiplier. But there’s more. 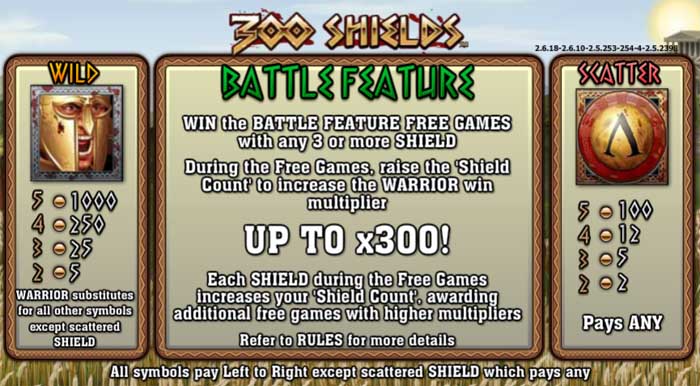 If you manage to gather 6 or more Shield Scatters, you will then enter the third series with another 5 extra freespins. On top of that, you will also receive a 25x multiplier on all your Wild wins. And last but not least, 12 or more Scatters give you yet another 5 freespins with an insane 300x multiplier on your Wild wins. As you go, you can keep retriggering the bonus feature if you land 3 or more Scatters at a time. 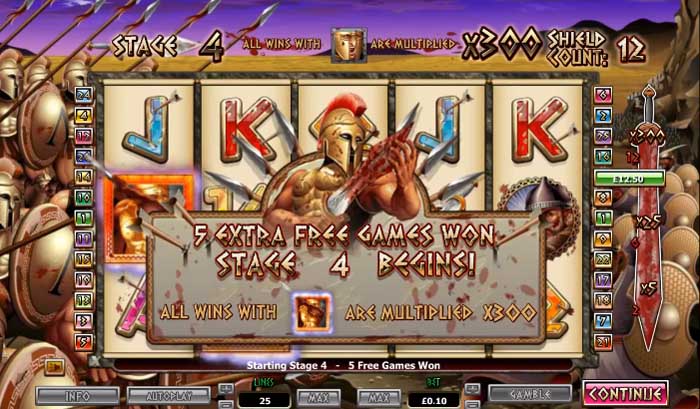 300 Shields is a highly volatile title with prospects for truly massive winnings. As you can see, the bonus round boasts a potential 300x multiplier, and that alone can be quite substantial. Of course, reaching that point in the freespins round won’t be easy and most times the prizes won’t be anywhere near that. But there’s a reason why this online slot machine has managed to win so many players over and gathered a bit of a cult following. We would caution to play carefully, as bankrolls have been known to disappear quickly with this title. But besides that even, it’s a very decent slot game with good visuals and an exciting theme.