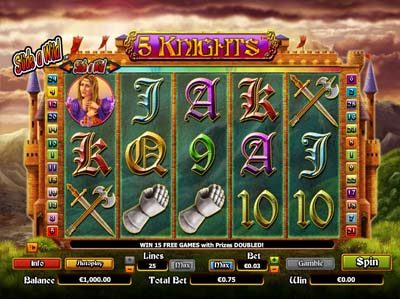 If you’re one of the many people who enjoy medieval adventures filled with knights and princesses and all the fairytale wonders of such, then this game from NextGen could be just what you’re looking for. It provides gamers with reels that are filled with crossed axes and swords, a metal glove, a decadent castle, a beautiful maiden, and, of course, a knight alongside. Furthermore, there’s a very compelling soundtrack which has been incorporated into the game, spurring you on through your game play.

The game itself is played on a five reel and three row interface, resulting in a fairly standard layout. The developer has also added a total of 25 pay lines into it as well, although these can be switched around to suit your own personal preferences for wagering. In addition, you’re able to change the amount you bet per round with the plus and minus buttons of the game interface. This starts from its minimum of £0.01 and increases up to £2.00 per active line. Therefore, a maximum overall wager of £50 per spin is able to be played by all participants.

There’s a wild icon included in the game, which is represented by the shield. This will stand in for all other icons on the reels to provide a winning combination, with the exception to this rule being the scatter icon.

There’s also an additional perk which relates to that symbol, which is called the ‘Slide a Wild’ feature. You simply need to use the on-screen slider to select any of the reels, and it will be enhanced with stacked wilds and wild multipliers, thereby presenting you with a greater chance of winning, and winning big!

The scatter symbol in this game is represented by the aforementioned castle, and this will provide a pay out wherever it appears on the reels. Should three or more of these come into view after a spin, you’ll be rewarded with a total of 15 freespins. All pay outs during this round are doubled.

Finally, a gamble feature has also been included, offering up the opportunity to double your winnings from a main game combination by playing a side game which requires you to guess the colour of the next playing card to be turned over.

5 Knights is one of those products that you just can’t get enough of. It’s full of special features, offers up some stunning visuals, and one of the best things about it is its soundtrack. Furthermore, the inclusion of the ‘Slide a Wild’ feature is a novel and very welcome benefit.