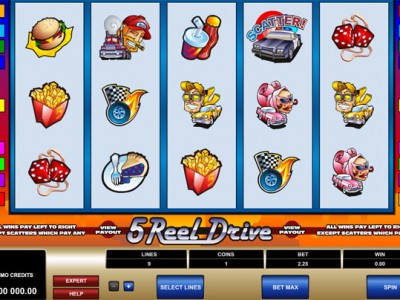 It’s time to hit the race track, so get out your furry dice, watch for the starting flag and hit the accelerator pedal!

Yes, 5 Reel Drive brings you all the excitement and wonders of attending a sports car race, and offers up reels filled with not only participants in the tournament, but also snacks that you can purchase while there, including a piece of blueberry pie, a burger, fries and a bottle of cola. There’s three different race participants – the truck driving maniac, the all-decked-out-in-pink female, and the yellow-car driving retro guy.

There’s no soundtrack to this one that really connects to the theme, which is a bit of a shame considering the actual subject the game is based on is such a strong one.

The yellow road sign acts as the game’s wild symbol, and this will substitute for any other symbol to create a winning combination, with the exception of scatters.

And speaking of which, it would appear that the race taking place is an illegal one, considering the scatter symbol is a police car. However, unlike many other games, the scatter symbols don’t particularly provide anything additional, like freespins or access to a bonus round. Instead, three or more scatters appearing in this game simply add an extra amount to your winnings.

5 Reel Drive has the potential to be something great, although it’s let down by the lack of a soundtrack, and lack of compelling extras. There could easily be a bonus round, or even freespin incorporated into its gameplay. And while the standard reel imagery is very appropriate for the theme, unfortunately this one leaves us feeling a little disappointed overall.