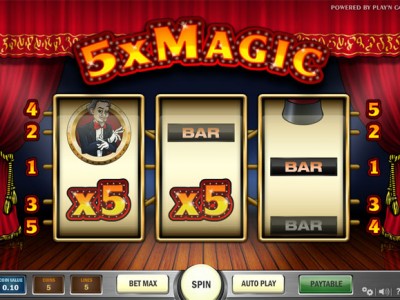 5xMagic brings together all the mystery and wonder of a magic show with the classic outlay of a traditional slot machine. The reels have majority symbols of the now infamous BAR symbol, but also incorporates top hats and a magician alongside. The BAR symbols can either appear as single height, double height or triple height stacks.

The game itself has three reels and two rows, and also incorporates five different paylines, which can be customised. There isn’t really a soundtrack included in the game per se, but instead, the noises of a magic act being played to a quietly chatting crowd has been incorporated instead. Players are able to place bets on the game between the minimum of £0.50 and the maximum of £2.50. by altering the coin value between £0.10 and £1.00, and the coins in play between one and five.

The top hat acts as the scatter symbol, with two of these doubling the total bet staked, and three multiplying it by 25 times.

5xMagic is a simple game to play, harking back to the traditional one-armed bandit type of slot machines. It’s extras aren’t specifically awe inspiring, but you can earn large payouts from the multiplying scatters and wilds. The inclusion of the BAR symbol is altogether quite enticing, and the addition of the magic theme makes it a little more thematic and intriguing.