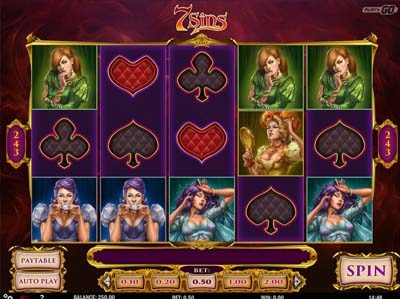 Play’n GO’s 7 Sins slot is all about mystery and temptation. It offers some really impressive graphics and compelling design. The basic symbols are shaped as cushions in the form of playing card suits, whereas the main symbols are voluptuous women, each symbolizing one of the seven deadly sins.

This game has 5 reels, 3 rows and the 243 ways to win payline format. Players can expect a theoretical RTP of 96.28% and can bet as little as 10p up to £100 per spin. The eerie, captivating music creates the exact kind of atmosphere to fit the title. And the many bonus features make for great winning possibilities with prospects of winning up to 1,112 times your stake.

7 Sins features not one, but two whole Wild symbols: a Lucky 7 and Double Lucky 7. The latter appears only on reels 2 and 4, but acts as two adjacent Wilds. So if you land both of them at the same time, you can win up to 7 of a kind!

The Lucky 7, on the other hand, is the highest value symbol on the reels. It appears only on reels 1, 3 and 5 can give you 70 times your stake for a winning combo of 7 symbols. 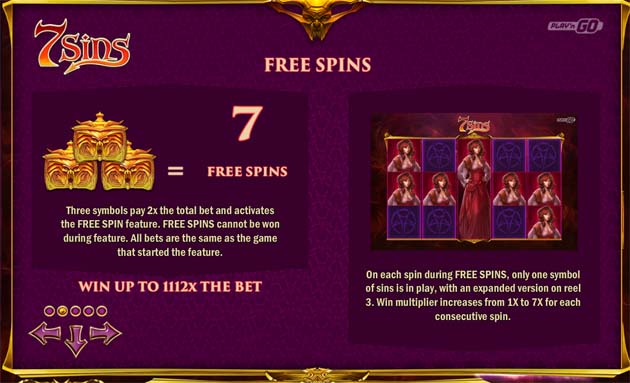 The lovely golden Pandora’s Box symbol appears on reels 1, 3 and 5, and landing three of them will activate the freespins bonus feature, granting you a total of 7 freespins. During each of the spins, one of the 7 sins will become a sticky, expanded symbol on the third reel. So, throughout the feature, they will all take turns on that middle reel.

Furthermore, each consecutive spin will offer a multiplier that increases by own. Thus, the first spin will be 1x, the second – 2x, and so on up to 7x. The only downside is that you can’t retrigger the freespins.

But landing only two Pandora’s Box scatters will also give you a little something to keep you interested. It will trigger the Seconds Chance feature. During this bonus feature, you will be presented with all the 7 alluring beauties with the opportunity to choose one of them. This will, in turn, aim to reveal the third missing scatter symbol, to trigger the freespins feature. Alternatively, you can win a cash prize instead, which really doesn’t hurt either. 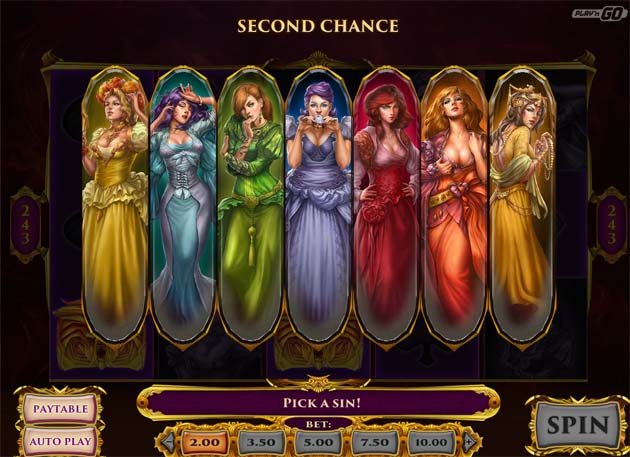 7 Sins is a pretty good, medium variance slot game by Play’n GO, which offers opportunities for some good wins. It’s entertaining, atmospheric and very pleasant to look at. The bonus features aren’t that many, but they still make for some big win possibilities.