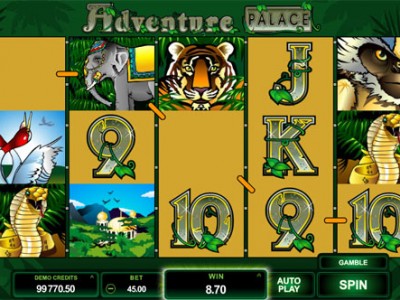 Well, you’ll find reels filled with tigers, snakes, cranes, elephants and a few other assorted animals. The game itself is five reels and three rows large, with regularly appearing symbols A, J, K, Q, 9 and 10 filling up the remainder of the gaps. Wagers can be placed from the minimum of £0.01 per line, and an overall minimum and maximum wager of £1.00 and £45 per spin can be placed, respectively. There are nine paylines included altogether.

The regally adorned elephant acts as Adventure Palace’s wild symbols, and any win featuring it as a substitute will double the payout. This symbol stands in for all others, except scatters. Spinning five elephants on a winning payline will provide you with a jackpot payout of 10,000 coins.

Adventure Palace does provide somewhat of an adventure, even if its title can be considered mildly confusing. There’s a decent level of extra features to make gameplay more interesting, and the graphics are also of a relatively good quality.