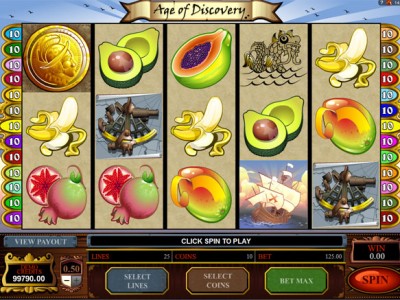 Microgaming has produced a fine specimen of a game in Age of Discovery, with the theme harking back to the days of discovering new lands, countries, flora and fauna, people and oceans. The game features the sound of water being pushed aside by a ship’s oars, as every spin runs through reels of various different discovered items. Such things as new fruits – mangoes, papayas and avocados – are included, as well as a couple of different seafaring items, like the sextant, also appear.

Playing this game gives you the choice of changing the coin value between its minimum of £0.01 and the maximum of £0.50 per line. The amount of lines included stands at 25, while the amount of coins played per round can be switched between one and 10. This allows a maximum overall wager of £125 to be played per spin across the five reel, three row layout.

Age of Discovery contains a wild symbol in the shape of an ancient coin, complete with a helmeted warrior engraved on it. This will substitute for other symbols to create a winning combination on the reels, except scatters and bonus symbols.

The scatter symbol of the game is a sea-based creature that has the look of a dragon. Three or more of these appearing on the reels will add a total of your bet placed times by a specific multiplier to your balance.

Finally, the compass included in the game acts as the bonus symbol, which will trigger the Treasure Bonus when three or more land scattered across the reels. This feature, which gives you the possibility of winning up to 32,250 coins, provides thirty different treasure sites. Behind each one is a random bonus win amount. It’s your job to select all the winning ones. Should you dig up a skull and cross bones, you’ll be transported back to the main game.