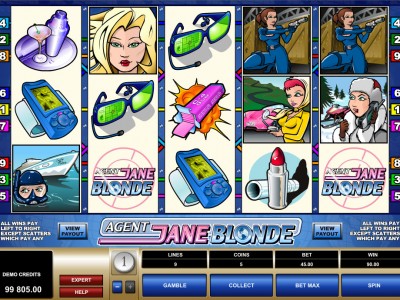 Blond…Jane Blond. And she’ll take a Martini, stirred but not shaken!

As you can guess, this game has all the makings of a James Bond story, with the reels filled with spy gadgets and different action scenes. Such icons as a bullet that fits into a lipstick case, a pack of exploding gum and some x-ray glasses with earpiece and microphone included are all incorporated. It could benefit from a more spy-themed backing soundtrack, as the sound of casino slot machines doesn’t really cut it when it comes to a game called Agent Jane Blond.

The interface provides a five reel and three row layout, with a total of nine customisable paylines. Coins start from a value of £0.01 and rise up to a maximum of £1.00 per line. The amount of coins used per line can also be changed, with the minimum being one and the maximum being five. Therefore, players can wager a total overall amount of £45.00 per spin.

A portrait image of Agent Jane Blond herself acts as this game’s wild symbol. She’ll stand in for any other symbol on the reels to make a winning combination, except scatters. Furthermore, any win including this icon will provide a double payout.

It’s easy to see where the influence for Agent Jane Blond comes from, although in picking such a detailed theme, Microgaming could have done so much more with this game. Yes, it has a wild symbol and yes it has scatters and freespins, but the lack of a decent soundtrack and extra touches to make the product as wholly good as it could be is a little disappointing.