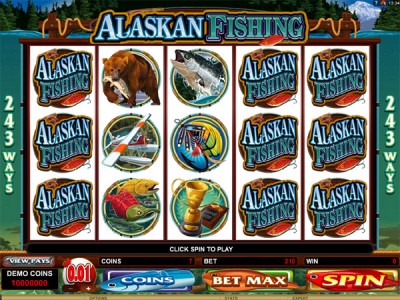 Ever been a fan of fishing? Some people say it’s one of the most relaxing and at the same time thrilling sports to exist. And where could be a better place to go fishing than in the icy depths of an Alaskan lake? All the best fixhermen cast their hooks in Alaska, and with good reason – there’s an abundance of trout, salmon and other fish just waiting to give you a bite.

That’s exactly what you’ll find with this game. Varieties of fish will spread across the reels, along with fishing tackle, a trophy for the winner of the competition, and other scenery found in Alaska, such as the brown bear who’s been doing a little fishing of his own. The game provides five reels and three rows as well as 243 ways to win. Coins are valued from £0.01 up to £0.05, and the amount of coins played can be altered between one and 10. Therefore, players are able to place a maximum overall wager of £300 per spin.

There is a somewhat relaxing soundtrack incorporated as well, although this does become tiresome after a short while.

The game’s logo is a stacked symbol in the game, and also acts as a wild symbol. Therefore, it provides extra opportunities to create winning combinations by acting as a substitute for all others, except the bonus and freespins symbols.

The freespins symbol is represented by the tackle case, and three or more of these scattered across the reels will provide 15 freespins. All wins during this round are doubled.

Finally, spinning a fisherman on reels one and five will trigger the fly fishing bonus round. This requires you to pick five spots on a lake to cast your line, and each one will provide a bonus range between two times and 15 times your total bet wagered.