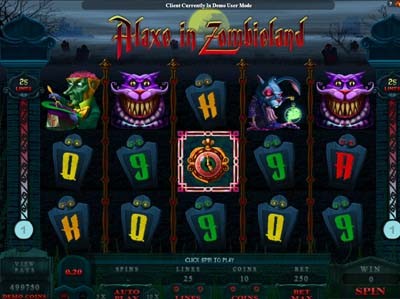 Alaxe in Zombieland takes the well-known tale of Alice in Wonderland and turns it on its head. Everything in this game has been given an altogether more demonic appearance, from the sharp-toothed Cheshire cat to the red-eyed white rabbit. Furthermore, the game also comes complete with a horror-filled soundtrack to boot, creating an altogether spooky atmosphere. As it stands, the symbols included in the game also include the Mad-Hatter, whose brain is also on display, Alaxe herself, and various Zombieland trinkets.

There’s a five-reel, three row game available to play in Alaxe in Zombieland, which also includes 25 different customisable paylines. The coin value of the game is able to be altered between the minimum of £0.01 and the maximum of £0.20 per payline. The amount of coins played per round can be altered between one and 10, resulting in a total maximum wager able to be placed of £250 per spin.

The pink brain on a cake stand acts as this game’s wild symbol, and this will substitute for all other symbols on the reels, except scatters.

There’s also three separate scatter symbols included, represented by the clock, key and perfume bottle. The clock scatter appearing anywhere on reels one, two and three will trigger the tea party freespin feature. The player selects one scatter icon to reveal a number of teapots that can chosen. Fourteen teapots appear in the reel window, and each teapot awards freespins, or freespins and a multiplier increase.

The key scatter icon appearing anywhere on reels two, three and four triggers the Red Queen’s Adventure. This presents five tombstones, with each one having five white roses. You need to select three of them to pain red, revealing an award.

Three bottle scatters appearing on reels three, four and five triggers the Gravestones feature, with the player needing to select which Gravestones are to be chopped by Alaxe. These reveal prizes.

Alaxe in Zombieland offers a great twist on a classic story with plentiful amounts of added extras.