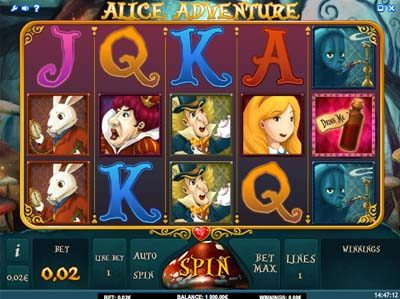 The Alice in Wonderland theme has been taken on by quite a few software developers over the years, and one of the more recent versions comes at the hands of iSoftBet. Welcoming you into the fairytale world, you’ll find reels filled with incarnations of all the major characters from the story. Alice, the Queen of Hearts, the Mad Hatter, the Caterpillar, and the White Rabbit are all present and accounted for here. In addition, you’ll have a wondrous piece of music playing every time you spin the reels, further enhancing the whole ‘Once Upon a Time…’ feel of this game.

The interface is made up of five reels and three rows worth of a layout. This also includes a total of 30 customisable pay lines, as well as the possibility of changing the coin value from its minimum of £0.01 up to its maximum of £0.02. Furthermore, players can alter the line bet from one up to 10. This results in you being able to place a maximum overall wager of £6 should you have all 30 pay lines active.

The icon of the ‘Drink Me’ liquid included on it acts as the bonus symbol in this game. Three or more of these appearing anywhere on the reels will activate the ‘Alice Bonus’, which offers up between five and 15 freespins. This round also includes a wild reel symbol, which replaces any other symbol on the reels to create a win, except for bonus, scatters and wild multipliers. Wild reels remain throughout the round.

Wild multipliers exist within the base game, meaning that any winnings are able to be multiplied by up to five times, while the wild element works in the standard way at the same time.

The Cheshire Cat symbol is this game’s scatter. These pay anywhere on the reels, with five paying out a multiplier of 25 times your bet placed.

Of the strong amount of games that use this theme as their basis, Alice Adventure is one of the better products on the market. It provides players with a fun twist on the story, and incorporates interesting special features to entertain along the way.