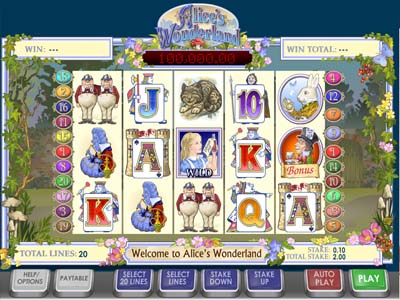 Alice’s Wonderland takes the popular story from Lewis Carroll and provides an intriguing and altogether beautifully crafted slot game to play. The reels are filled with symbols of various different characters from the story, including the Cheshire cat, the white rabbit, the caterpillar and, of course, Alice herself. You’ll also be able to listen to the fantasy-tinted soundtrack that plays as you spin the reels, with winning combinations providing wonderful animations that make gameplay even more exciting.

The game features five separate reels and three rows worth of a layout, while a total of 20 different paylines are also included. These can be customised to suit your own personal wagering preferences, while the stake that is placed can also be altered up or down with their respective buttons. This allows a minimum coin value of £0.01 to be played per active payline, and a maximum value of £10.00. Altogether, players can place a maximum overall wager of £200 per spin.

Alice acts as the game’s wild symbol, substituting for all other symbols to create a win, except bonuses and scatters

There are three different scatter symbols included within the game, the first one of these being the Mad Hatter Scatter. Three of these icons appearing anywhere will trigger the Tea Party Bonus game. This requires players to select a guest, of whom will be served tea. The more tea that they drink, the greater the prize you win. Continue selecting guests until they’ve all had their fill. During this round, the game’s progressive jackpot can be won as well. This is triggered when the sugar bowl spoon serves sugar to the guests.

The second icon is the Freespins Scatter, represented by the white rabbit. Three of these symbols appearing will provide between seven and 20 freespins of the reels, with between three and five sticky wilds incorporated in the round.

Finally, the Rabbit Hole Scatter appears only on the middle reel, and this triggers the Rabbit Hole Bonus. This round sends Alice tumbling down the rabbit hole, collecting prizes as she goes, and finishing when she lands.

Alice’s Wonderland has taken a great story and provided a compelling slot game with a myriad of additional features included.