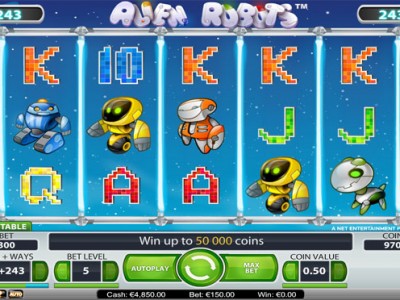 What’s better than aliens? And better than robots? Alien Robots, of course! Here’s a game from Netent that has all the features of a quality and entertaining product. Alien Robots has reels featuring symbols of just that, alien robots. Each one has a different colour, and each one has a different shape. The remainder of the reels are filled with often seen A, J, K, Q and 10 symbols.

There are 30 standard paylines included in the game, with the standard maximum wager across these lines being £75.00 per spin. However, you can also activate the 30 lines + 243 ways to win feature, which will double your wager, providing a maximum overall of £150 per spin. The interface of Alien Robots features five reels and three rows, and the bet level in the game is alterable between one and five.

There’s a wild symbol incorporated into gameplay, featuring a green-brained alien. This will substitute for any other symbol on the reels to create a winning combination, except for scatters. During the freespins mode, wilds appearing on the reels trigger the expanding sticky wild feature. These expand to cover the whole reel and are held in position for a re-spin.

A great feature, while not being particularly special, is the game’s soundtrack. It’s electronic, sci-fi and robotic all at the same time, and provides enough extra entertainment to keep you coming back for more.