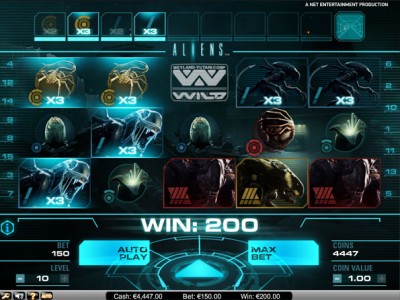 If there was ever a sci-fi/horror film series that needed turning into a slot game, it’s Aliens. And thanks to a collaboration between Netent and 20th Century Fox, that game is now available to play. From the opening video package to the reels flooded with face-huggers and warrior aliens, this game is solidly entertaining and thrilling at the same time.

There’s a standard five reel and three row layout in the main game, with fifteen separate paylines included. The coin value can be changed between the minimum of £0.01 up to the maximum of £1.00 per line. Meanwhile, the bet level can be altered between one and 10, giving all players the opportunity to place a maximum overall wager of £150 per spin.

Aliens is a unique game in its own right, as it features three separate levels to advance through. The first is the main game, and with every winning combination, you’ll fill up a meter that can be seen at the top of the reels. The Weyland-Utani symbol acts as a wild symbol here, substituting for all others to make a winning combination, and will appear on reels two to five during this level and anywhere on level two.

Once you have filled up the aforementioned meter, you’ll advance to level two, which will see the reels spin and you making your way through a tunnel whilst fighting off aliens. You have an ammo clip reel that decreases every time you shoot, and it can only be replenished with pick ups from the spinning reels.

The final level takes you to the queen Alien’s lair, or ‘The Hive’. Here, you must destroy the queen and her eggs before any Aliens get to you and take you down. You have a Hive health meter which displays the amount of damage you’ve done, and again there’s an ammo counter for both bullets and a grenade counter. Reaching the end of this level will reward you with a coin prize.