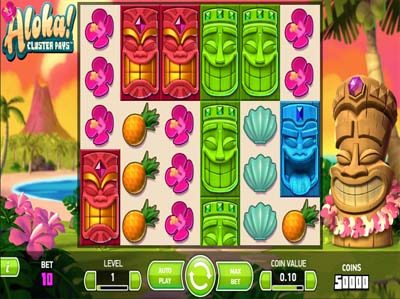 If you’re ready to be whisked off to the island of Hawaii and soak in the tropical sunshine, beaches and waves, then Aloha! Cluster Pays from Netent will be all you need. It’s full of life, colour, heat and ost importantly, gaming entertainment. The developer has really gotten in to the creative process of providing games which are unique in comparison to all the rest, and this one really sits well in that category. The icons included on the reels feature three different totem pole masks, while a pineapple, half a coconut, a seashell and a pink flower provide the rest.

The game itself is played on an almost square interface, ditching the regular rectangular offerings of other slots. It’s six reels and five rows large, and to add an even better twist on things, the game doesn’t have any bet lines integrated in to it, meaning that a large majority more wins can be formed. You do have the chance to customise the value of the wager you place per spin though, and this begins with the value of a single coin, which provides a range of between £0.01 and £2. Furthermore, you can change the bet level between one and 10, and this gives a maximum overall wager possibility of £200 per spin.

A symbol in this game is part of what is considered a cluster. A cluster if defined as a horizontally or vertically line including the same symbol. If nine or more symbols showing up in a cluster you will be awarded with a win for that spin.

There’s also the inclusion of a substitution symbol as well, and this is represented by the wooden crate with a ? on it. This wild will replace all other symbols and can appear on all reels, but they cannot stand in for the freespin symbols.

Whenever you generate a win, you’ll also activate the ‘Sticky Win Re-Spins’. During this, the winning icons are all held in place while the remaining other symbols re-spin. Furthermore, if the cluster size increases, these symbols also stick, while the rest of the non-winning symbols will do another spin again.

Aloha! Cluster Pays is one of the best Netent slot games to be released in recent months, providing entertainment, great special features and a wonderful base theme to experience as well.