An Evening with Holly Madison 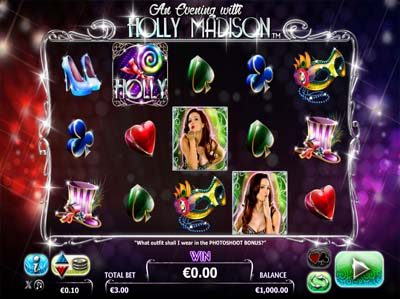 For those of you wondering who exactly Holly Madison is, she’s a New York Times Best-Selling author, model, showgirl and television personality. She’s more so known for being one of Hugh Hefner’s girlfriends on the reality television show, ‘The Girls Next Door’, so, why wouldn’t she be in line for a slot game created around her? Of course, with Holly being the focal point of this product, you’ll find several icons of her on the reels, along with such additional items as a pair of shoes, a masquerade mask, a fancy top hat and plenty of other relative symbols.

The game itself is presented on a five reel, three row interface, and alongside this, NextGen Gaming have also added an unknown number of pay lines. It’s fairly odd to see the screen with no information whatsoever relating to the number of pay lines involved, but whatever the number, they’re fixed as they are. You are able to alter your wager around though, which starts from a minimum of £0.01 per line and increases up to £2.00, giving an overall maximum wager opportunity of £60 per spin.

There are three icons of Holly in the process of blowing a kiss to all her fans. Each of these acts as a wild symbol, and appear on reels two, three and four. As such, they’ll stand in for any other symbol on the reels, except scatters, in order to form a winning combination. In addition, if you spin three wilds, the ‘Holly Goes Wild Feature’ will be triggered, which will see the wild expand to cover all positions on the reel.

The icon of the multi-coloured lollipop acts as the game’s scatter, and this has a couple of different functions. Its first is to trigger the feature of the ‘Rockin Respin’, which happens when two scatters appear anywhere. The reels with the scatters on them are held, while the others re-spin. Its second function is to provide 10 freespins when three or more of them show up anywhere. During the round, you’re able to collect ‘KISS’ symbols, and after the freespins round is over, you’ll enter the ‘Photoshoot Bonus’. Each kiss you collect may repeat your freespins win.

It seems quite odd that a games developer would choose such a personality to base a game around, considering the amount of them that are out there. However, what you’ll get with this product is a mildly entertaining offering, which has a multitude of special features incorporated into it.