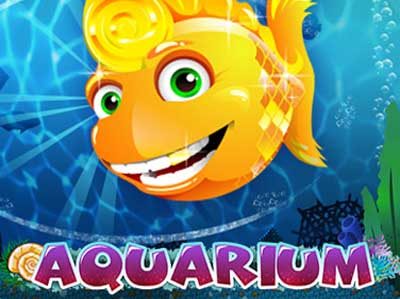 Aquarium is an aquatic themed slot game by software manufacturer Playson. This slot has a really fun, 3D animation feel to it. In fact, when forming winning combos, some of the icons will display a neat little animated sequence. Most of the symbols on the reels depict personified marine animals, such as different types of fish, seahorses and starfish. The backdrop quite obviously depicts and underwater scene, as the title would suggest, we are looking at an aquarium, after all. And the soundtrack really helps give you that real underwater vibe, too. As you spin the reels, you will hear air bubbles surfacing and there’s also some serene music there to go with that. 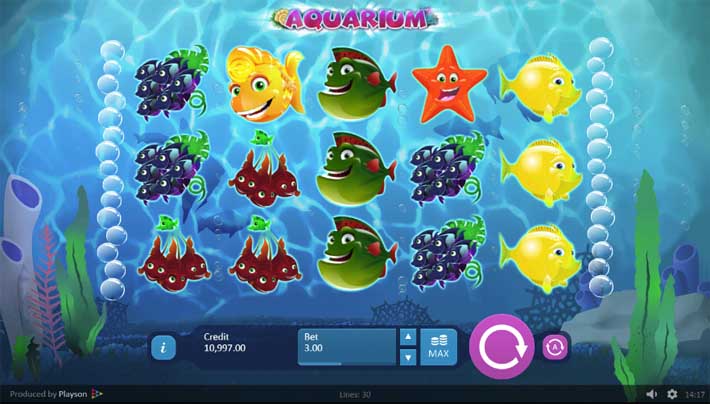 The layout in this online slot game is that of most other modern day slots, namely a grid of 5 reels and 3 rows. You will notice that the maximum number of paylines here is 30, but it’s not fixed there. In fact, you can easily switch to a lesser number using the controls just below the reels. The same also goes for your wager amount, which can span anywhere from only 1p per spin up to a maximum of £90 per spin. However, the RTP in Aquarium isn’t quite as impressive at roughly 95.53%.

Aquarium boasts a total of only 2 special symbols, the first of which is its Wild. The Wild comes in the form of a widely smiling yellow fish. Then again, most of the characters look pretty happy in this slot game and are smiling just as enthusiastically. The Wild doesn’t have any value of its own, but it can appear in any position on the reels. Furthermore, it will be there to offer players a helping hand in substituting for any of the other symbols and creating winning combos. However, this Wild cannot replace the Scatter symbol.

In turn, the Scatter symbol is represented by a joyful orange starfish. Like the other symbols on the reels, it will offer payouts if you manage to land at least 3 of it. However, unlike those other symbols, you will not need to land the Scatters on an active payline. It is enough for the Scatter to appear at least in three positions anywhere on the reels to offer payouts. What’s more, if you can land the maximum of 5 Scatters, you will receive 500 times your total bet.

For better or worse, though, this is the only extra in this slot game. There are no additional special features, meaning no freespins, no pick-me games or any other bonus rounds. In terms of simplicity, this is about as basic as contemporary online slots get.

Aquarium is a very simple slot game, where it’s really all about gameplay. Don’t expect any freespins or other special features to spice things up. While for some this may be a complete turnoff, many players actually seek simplicity. And if you’re one of them, give Aquarium a try. But keep in mind that this is a highly volatile slot.