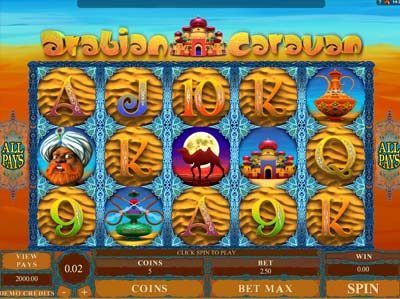 If you’re ready to take a trip to the Middle East, then why not go with a bit of fun in mind, by playing the Microgaming slot, Arabian Caravan. Not only is it filled with vibrant colours and graphics, but it incorporates some wonderful game play as well, and every spin is met with some authentic-sounding music. The reels are set against a backdrop of the desert, and it’s on these reels that you’ll find the symbols of A, J, K, Q, 9 and 10. They are joined by four other icons – one of a stack of plush pillows, another of a hashish, a third of an ornate jug and a fourth of an Arabian tradesman.

It’s all offered up on a standard five reel and three row interface, and Microgaming have also added a total of 243 different ways to win into it. While you’re not able to adjust this particular feature, you can change around the value of the bet that you place per round. Your coin value is changeable between £0.01 and £1, while the amount of coins in play per spin can be changed between one and 10. This allows players to place a maximum overall wager of £250 per spin.

A wild symbol has been added to this game as one of its special features, and this is represented by the Arabian palace. These will stand in for all other icons in order to form a win, with the exception of scatters.

And as far as the scatter icons are concerned, these are represented by a camel. Scatters pay in any position, with five of them paying out a total of 1250 coins. Three or more of these icons coming into view will trigger the Desert Jars bonus round. In this, you’ll be presented with 15 different jars. You need to select from these, with each one revealing either an oasis, city or sand. The oasis provides a prize, sand ends the round and the city provides a larger reward as well as a second round of Desert Jars.

This is one of the better games offered by Microgaming. It has a great theme behind it, appealing graphics and some nice special features alongside.