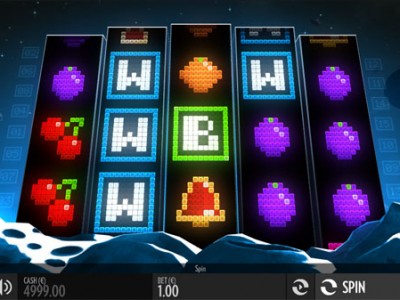 If you’re a fan of the retro, Arcader should definitely be a game on your hit list. The immediately 90s introductory video and subsequent soundtrack, before the reels filled with pixelated icons appear, will take you back to those days of Pacman and other such games. The symbols included in this game are those of a traditional slot machine, oranges, lemons, plums, BARs and others, but all presented in a very retro way.

Arcader offers up five reels and three rows-worth of a layout, plus 15 fixed paylines and a theoretical return to player (RTP) of 96.1%. Wagers can be placed from a minimum amount of £0.20 and up to a maximum of £100 per spin.

The wild symbol, represented by a large ‘W’ with a blue border, will substitute for any other symbol on the reels to create a winning combination, except the bonus symbol, mystery symbol and expander.

The expander looks very much like a lift button, and this will expand the reel that it appears on with the symbol representing the best possible pay line.

Then there’s the bonus symbol, which is a large ‘B’ with a green border. Three or more of these appearing scattered across the reels provide you with nine freespins. A multiplier of times 3 and times nine will also come into effect for four and five bonus symbols, respectively. During the freespins round, you get a single sticky wild chance on the three central reels at the start of each one.

Arcader provides an exciting game that is stuffed full of extra features and a retro, nostalgic feel.