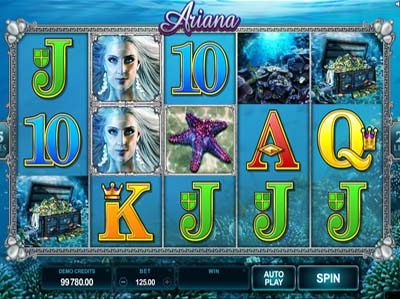 Ariana will take you down to the depths…no, not to the depths of hell. To the depths of the bottom of the ocean, where you’ll be able to swim amongst coral reefs and various other marine life. Judging from the imagery in the game, Ariana herself appears to be a mermaid, and the look on her face doesn’t tell you one way or the other whether or not she can be trusted. However, the reels featured in this game offer up icons of the underwater creatures that she shares an ocean with, such as a seahorse, a starfish, and the aforementioned coral.

The main game provides you with a total of five reels and three rows, while an inclusion of 25 different paylines have also been integrated. Players are able to change their in-game wager by using the up and down arrows in the ‘Bet’ box. This alters from its minimum of £0.25 up to the maximum of £125, while an autoplay button allows for all gamers to play up to 100 spins at the same wager level.

During the base game, any full symbol stack on the first reel will expand all matching high symbols on the remaining reels. This occurs only as part of a winning combination. During the freespins round, the same takes place, although all wilds are also expanded.

The Ariana logo acts as this game’s wild icon, and this will substitute for all other symbols on the reels to create a winning combination, except for the scatters.

And speaking of the scatters, these are represented by the starfish symbol. Scatter wins offer up multipliers of the total bet staked, which increases with the more scatters appearing. Furthermore, three or more of these making an appearance will trigger 15 freespins of the reels, with the wild being stacked on reel one for the duration.

This game provides all players with a wonderful underwater experience, while simultaneously offering up an intriguing game to play.