Art of the Heist Slot 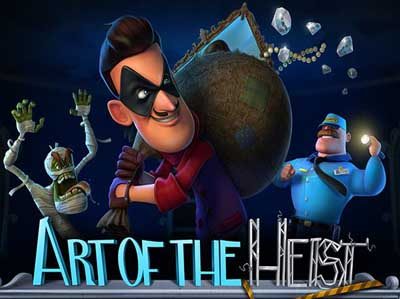 Art of the Heist slot review

Art of the Heist is an entertaining 3D slot game by casino slots developer Playson. Robbery themes aren’t that uncommon in the world of online gambling, and some of them actually make for pretty decent slots. But this one clearly stands out from the crowd with its superb graphics and thrilling features. The setting takes place at night and the reels are actually the inside of a museum that is about to get ransacked. A Pink Panther styled soundtrack adds another layer of juiciness to the whole atmosphere. And as for the symbols, they focus mainly on the various valuables that the museum has on display. Such are jewels, crowns, antic sculptures, vases and paintings. 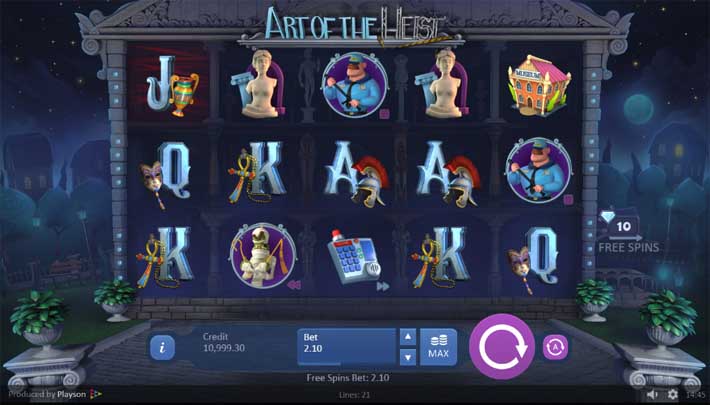 The setup in Art of the Heist is pretty basic, featuring 5 reels and 3 rows. There’s an odd number of paylines, however, which you don’t come across every day. Namely, there are 21 of them and they are fixed. This means you won’t be able to adjust the number, but you are certainly free to do so with your wager amount. In fact, stakes here range from 21p per spin and all the way up to £126 per spin. There’s also a relatively high RTP of around 96.67%.

Art of the Heist special features

Art of the Heist boasts a fair share of special features and with them – a few special symbols, too. For one, there’s a Wild symbol in the shape of a small treasure chest, perhaps more of a jewelry box. It can replace any of the other symbols to help create winning combos. The only exception in this case is the Bonus symbol.

The Bonus symbol, in turn, is in the form of the Mona Lisa painting. But aside from the being the Bonus symbol, this is also the most lucrative icon on these reels. However, it’s more important that it can actually trigger the Bonus game. In it, you will need to try and find out which room hides the switch that will disable the security system. If you can do this, you will then steal the painting and win a very large prize. However, keep in mind that some of the rooms hide security guards, who will end the feature.

During the base game, you will notice that the robber will appear at the top left corner of the reels. He will then make his way back and forth along his pathway through the reels. Different symbols will tell him how many positions to move in either direction, whereas some will add freespins to your counter. If he reaches the end of the trail, the freespins round will start with 10 freespins. But landing on a Bonus symbol will also start the freespins bonus round.

Art of the Heist is a fun slot machine that offers unusual gameplay, which is partly why it’s so fun. And it’s also relatively safe for new and inexperienced players, due to its low to medium variance.