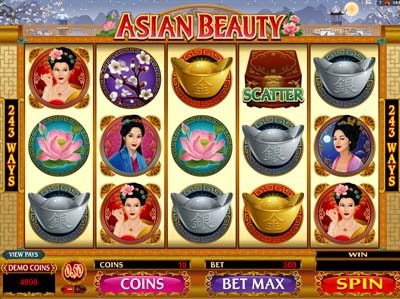 For a slot game with an Eastern treat, you should definitely try out the Microgaming offering, Asian Beauty. It features rich graphics with an appealing base theme behind it. There’s also an authentic-sounding piece of music incorporated into the game as well, and upon the reels, you’ll find the various different icons. These start with floral icons, one of a water lily and another of cherry blossoms. There’s also two ornaments, one in gold and another in silver. Four female characters provide the game with the remainder of its symbols.

The layout of Asian Beauty is offered up on five reels and three rows, so everything is quite standard as far as this is concerned. Microgaming have also added 243 different ways to win, and this is not something that you’re able to customise at all. However, you do have the chance to change around the bet that you place, and this is done first of all by adjusting the value of a single coin. This provides a range of between £0.01 and £1, while the amount of coins that you can play per round is changeable between one and 10. This allows a maximum overall wager of £300 to be placed.

The developer has added a few specialities into this game, and these begin with its wild symbol. This is represented by the logo of the game, and this will substitute for any other symbol on the reels in order to form a win, with the exception of the scatters.

And speaking of the scatter icons, these are represented by the ornate jewellery box. These will pay out wherever they show up on the reels, with five of them paying out 100 times your total bet placed. Should you spin three, four or five of these on to the reels in any location, you’ll receive a reward of 10, 15 or 25 freespins, respectively. All wins during this round pay out double.

There’s also the addition of a mirror bonus game, which is triggered at random. In this, you will be presented with 12 mirrors, and behind each one is one of the four female characters. You need to match three of these to win a multiplier value.

We really enjoy playing this game. It’s nothing overly unique in terms of its theme, but the special features and top quality graphics make it an attractive game to play.