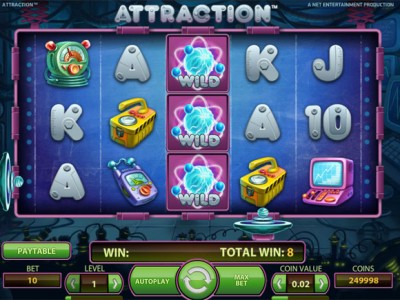 As you descend into the laboratory, you’ll be taken to a five reel, three row slot game featuring numerous symbols relating to science, electronics and physics. There’s the technical computer, the gauge, the laser beam, the remote control and others, providing you with a thoroughly gadgety game.

The coin value in this game can be altered between £0.01 per line and £1.00 per line, and speaking of which, this particular product features 10 separate paylines to wager on. The bet level is also changeable between one and 10, so all players can place a maximum overall bet of £100 per spin on the game. There’s also the inclusion of an electronic soundtrack that is just as compelling as gameplay itself.

Attraction includes something known as the Magnet Feature, and this is activated at the start of every single spin. For every spin where a wild symbol appears on the same reel or row as a magnet, a re-spin with one or more sticky wilds is triggered. For every re-spin, two magnets become active. Should a wild symbol appear on the re-spin, a further re-spin and a further magnet are provided.

The game’s wild symbol is represented by an atom, and it can only appear on reels two, three and four in both the main game and re-spins. They’ll substitute for any other symbol on the reels to make a winning combination. The sticky wild is exactly the same symbol, except the main atom is blue instead of pink. The sticky wild has the same effect on winning combinations as the standard wild, but will only appear during re-spins.

Overall, Attraction is very fun game to play, with a stellar soundtrack and visually pleasing appearance. The magnet feature is very unique, and provides a wonderful perk.