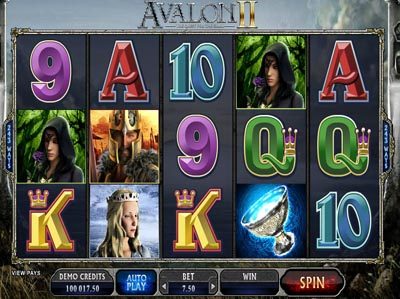 Building on the big success of Avalon, this sequel brings all the thrills and excitement of the original game to your screen, whilst also offering up some much improved graphics and game play. Avalon II is Microgaming’s take on the tale of King Arthur and his fabled quest for the Grail. The reels feature characters from the story, including Merlin, Arthuer himself, Guinevere and Morgan le Fay, and these icons are all displayed on a wonderfully presented interface. A very nice piece of music has also been integrated into the game to allow for a pleasing atmosphere, and further enhances the product.

There are five reels included, as well as three rows. Meanwhile, a total of 243 ways to win have been added alongside. Gamers are able to alter their wagered bet by using the left and right arrows next to the box, with the minimum bet allowed being £1.50 and the maximum bet offered being £7.50 per spin.

During game play, Merlin can appear at any time to award a random cash prize or multiplier to players. In addition, reel three plays host to the ‘Lady of the Lake’ icon, and this acts as a wild symbol, standing in for other to create a win. Should it do this, it will expand across the whole reel to possibly award additional wins.

The symbol of the Grail acts as the scatter icon in this game, and three, four or five showing up on the reels will trigger the ‘Grail Bonus’.

This then requires you to journey through the kingdom, playing up to eight bonus games along the way. During the quest, you can choose one of two paths to complete a different bonus game, which are as follows.

Your first bonus game is chosen between ‘Lake of Legend’, where you must reassemble the sword, Excalibur by rolling the dice to retrieve fragments, or ‘Misty Vale’, which gives you 15 freespins and requires you to choose a character icon as your extra wild.

Avalon II is very much a super game with so many additional extras that it makes the majority of other slot games pale in comparison.