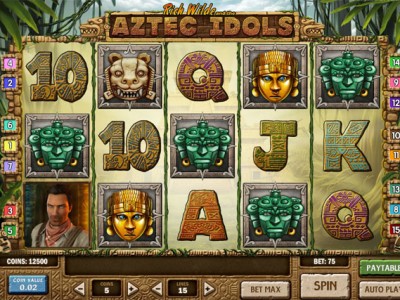 Please be introduced to Mr.Rich ‘Richard’ Wilde, explorer, adventurer and tourist. He’ll accompany you on some winning adventures in the South American jungle. And that adventure all begins with the Aztec Idols slot game. The reels in this product are filled with thematic A, J, K, Q and 10 symbols, as well as Aztec-inspired busts. There’s also a very apt soundtrack incorporated into the game.

The game itself is played on a standard five reel, three row layout, and a total of 15 paylines have been included alongside. These can be customised, in the case that you have a preference for wagering on less lines. The coin value can be altered between £0.01 and £0.25, and you’re able to play between one and five coins per round, allowing you to wager an overall maximum of £18.75 across all lines.

Mr. Rich Wilde provides the game with its wild symbol, and he will stand in for any other symbol on the reels to create a winning combination. The only exceptions to this rule are bonus, freespin and scatter icons.

The bonus symbols are represented by an ancient Aztec pyramid, and three of these appearing on a payline will trigger the bonus game. This presents you with five different Aztec statues, which you need to choose between in order to win up to 150 times your total wager placed.

Three wheel of fortune symbols pay out five times the total wager placed and activates the freespins mode. Spinning the wheel will provide you with the amount of freespins you will have, and also offers up an extra scatter symbol. This gives you more opportunities to earn winnings.

Aztec Idols is a great game to play, especially for those of you who enjoy ancient civilisations and adventure. The added features are exceptionally creative and intriguing, and there’s little to stop anyone playing this wonderful product.