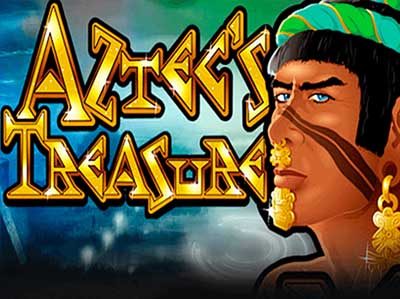 Aztec’s Treasure is an online slot game by casino software manufacturer RTG offering a journey to what is today known as Mexico, back when it was still the Aztec empire. It’s bright and colorful, with plenty of traditional imagery on the reels. But at the same time, you won’t be able to help noticing that this game is still rather dated. The graphics are pretty flashy and of decent quality, but they are certainly nowhere near the sophistication that most contemporary slots possess. Nevertheless, it’s a compelling theme that fans of the genre will no doubt appreciate. Unfortunately, there’s no matching backing track to amplify the atmosphere, though. In the backdrop you can make out the sun setting behind the tall mountain peaks. And just below them are the traditional Aztec structures, such as the famous pyramid. 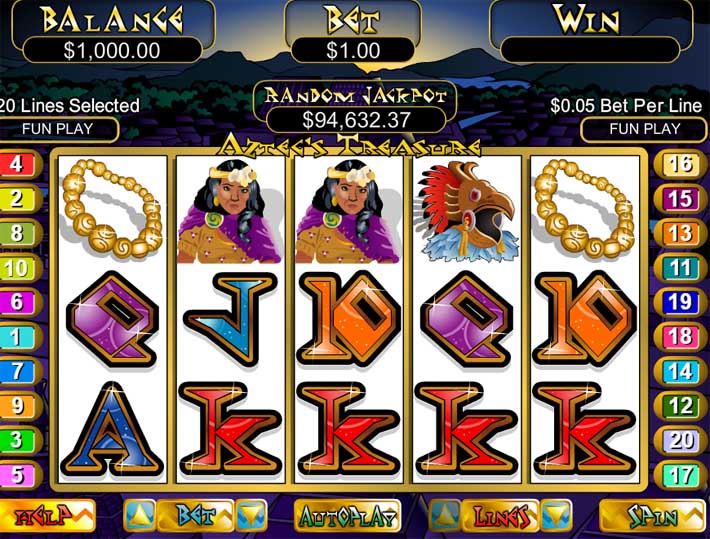 The icons here are a real treat to look at and are unlike what you see in most other titles. They start off with the lower valuable card symbols. And every one of them is shinier and more sparkly than the one before. The icons in question include A, K, Q, J, 10 and 9. After that we have the more thematic symbols. And first in line is the gold jewelry, starting with the brilliant gold beads. Following them is what appears to be a pretty large gold pendant with green gemstones. After that we have an elaborate bird mask, following which is a jaguar symbol. And last but not least is an Aztec woman in traditional dress and wearing a golden headpiece. She is also the most lucrative symbol on these reels, offering payouts of up to 5,000 coins. As for the game’s layout, it features your common 5 reels and 3 rows. There are 20 paylines available in total, but you can regulate these if you like. Hence, bets here can start off at a minimum of 20c per single spin. And the maximum available betting amount in this title is $100 per spin.

The Aztec King is the game’s Wild symbol. He doesn’t offer any payouts of his own, and you can’t see just anywhere on the reels either. In fact, the Wild can only land on the middle three reels 2, 3 and 4. But when it does appear, it will be able to substitute for any of the other symbols on the screen. It can help complete winning combos and thus increase your winning potential. However, the Wild cannot replace the game’s Scatter symbol, which comes in the form of a golden idol.

Unlike the Wild symbol, the Scatter actually does offer payouts (though not very big ones) and can also appear in any position, on any of the five reels. And on top of that, it will also be able to trigger the main attraction of Aztec’s Treasure – the freespins bonus round. For this to happen, though, you will need to land at least 3 Scatter symbols all at the same time. 3 Scatters will grant you a total of 5 freespins, whereas 4 Scatters will award you 15 freespins in total. And last nut not least, if you land all 5 Scatter symbols, you will receive the maximum of 25 freespins. 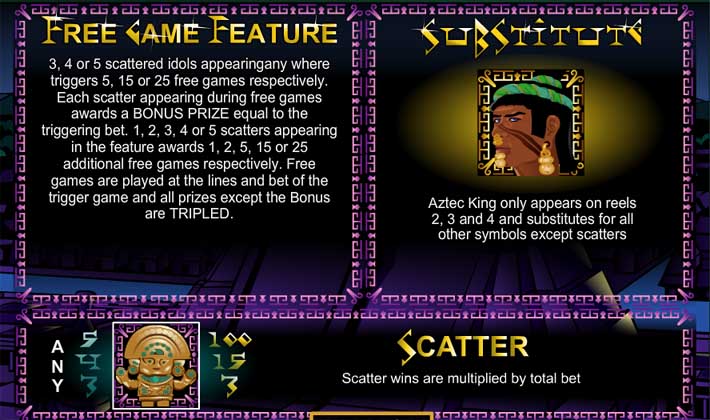 But that’s not all yet. Even during the freespins bonus round, be sure to still keep an eye out for the Scatter symbol. For every idol Scatter that you land, you will get a bonus cash prize. The prize will be equal to the betting amount that triggered the special feature. And on top of that, you can also benefit from addition freespins for landing those Scatters.

Thus, 1 or 2 Scatter symbols will each award you one or two freespins, respectively. And landing three or more will retrigger the feature, giving you an additional 5, 15 or up to 25 freespins. But if that doesn’t seem like enough for you, catch this: all freespins winnings in this title will also be subject to a 3x multiplier!

Besides the special feature, we should also point out that Aztec’s Treasure comes with a Progressive Jackpot. In fact, you will see it as soon as the game loads and can monitor it all throughout gameplay. You will see it just above the reels, and can win it at random after the completion of any spin.

Aztec’s Treasure is a fairly decent offering from RTG, even though gameplay here is rather basic and straightforward. There’s just one main special feature, but it has plenty packed into it. And it can also prove to be very rewarding, especially thanks to the 3x multiplier. But on top of that it certainly doesn’t hurt to get cash prizes and extra freespins throughout the bonus either. As far as the variance goes, we would place this title in the solid medium range. So, you will have the opportunities to take advantage of the bonus rounds at evenly spaced intervals.