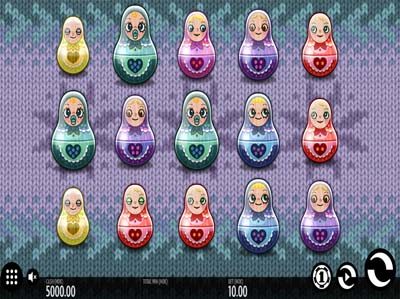 It’s not every day that you come across a Russian-themed slot, but looks like it’s exactly that day. Meet Babushkas – a new creation by Thunderkick, which definitely brings something new to the table. In the world of slot machines, we’ve pretty much exhausted every theme you can think of, so it’s always refreshing to see something unusual. This game centers on Russian dolls and has a nice soundtrack to go with them.

The game features 5 reels, 3 rows and 17 fixed paylines. You can stake anywhere from £0.10 to £100 per spin. However, the RTP is a rather bleak 95.8%, but there are some fairly interesting bonus features to make up for that.

Set against a background of grandma’s knit work, you will be chasing Russian dolls on these reels. Note that that dolls are actually shown in different stages of life, from infancy to old age. The special symbols are the two colored eggs that only appear on reel three. They are both Wilds, technically, but have their differences.

One is the regular Wild symbol, with a ‘W’ on it. It effectively acts as a substitute for any and all of the other symbols. The second one, though, is the Special Wild symbol with a star on top of the ‘W’. If you land this one, it will activate one of the three Mystery features of the game. First up is the Scare Bear feature, which will open the egg to reveal and angry brown bear. The bear can appear in three sizes, depending on which all the lowest value symbols will upgrade 1, 2 or 3 times.

The next Mystery feature offers us the Charm Bear. As opposed to the previous fellow, the egg will crack open to show a sweet and friendly dressed up bear. It will upgrade all the symbols on the reels by 1 level.

And last but not least, the third and final Mystery feature is the Dance Bear. This peaceful giant of the forest will award you 7 freespins. What’s more, during each of the freespins, a new Wild egg will appear on the third reel.

But there are more extras, too. If you can fill all the reels with symbols of the same kind, they will then all upgrade at once. But you might want to keep an eye out for the oldest dolls. When they upgrade, they become the special Ghost doll and can give you 100 times your initial stake!

Babushkas makes for a decent game, with good graphics and dynamic gameplay. The bonus features here provide an interesting concept and we found the Ghost doll feature rather entertaining as well, along with the way the developers decided to align the dolls by age. But aside from all that, we can’t really say much else. The RTP is OK, but nothing more, and the game is quite obviously a low variance one.