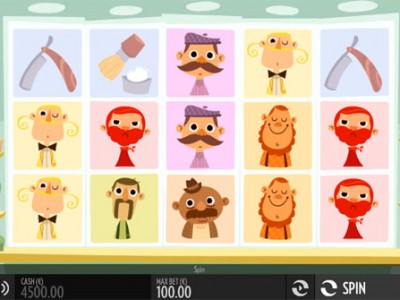 Thunderkick certainly has some interesting themes when it comes to certain games the company has produced, and Barber Shop is of no exception. This game takes you along to a grooming salon, where various men of all shapes, sizes, ages and backgrounds have flooded the reels to have their hair worked on. From the red-head with a full face beard to the decidedly French-looking gentlemen with beret and thick moustache, this game is certainly a visual treat.

Barber Shop provides five reels and three rows worth of a layout to its players, and also offers up 25 fixed paylines as well. There are 14 different available wagers to choose from, starting at the minimum of £0.10 and increasing up to the maximum of £100 per spin. An autoplay feature allows a maximum of 5000 consecutive spins to take place at the touch of a button.

As with other Thunderkick products, this game provides a very graphically pleasing experience, as well as an appropriate and not overbearing soundtrack.

The game has a re-spin feature, which is triggered every time you get a payline win and/or three or more bonus symbols. All the symbols that triggered the re-spin will be locked in place while the rest spin again. Further wins on the re-spin will trigger another re-spin, and so on.

The bonus symbol of the red and white striped barber’s pole will provide freespins, starting with 10 for spinning five across the reels. Any additional bonus symbol appearing grants a further two freespins on top, up to a maximum of 30. For each re-spin that takes place in the freespins round, an inclusive multiplier will increase up to the maximum level of times five.

Finally, when all freespins in the bonus round have been used, the Inwinity Spin will be activated. The game will then continue to spin until a winning combination has been formed.