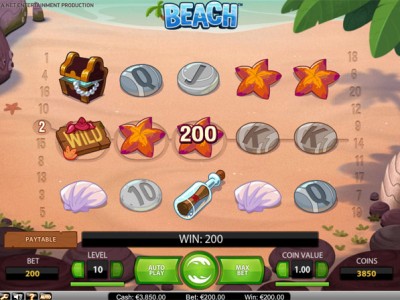 Hear the crashing of the waves and the sound of seagulls as you take in some much needed sun and sand. That can only mean one thing – the Beach slot game from Netent, of course. While the pebbles, starfish and shells that fill the reels are only to be expected from a seaside game, what’s really great about Beach is that instead of the reels spinning, the symbols are simply washed ashore with a surfacing wave.

Players of this game will find five reels and three rows, with a total of 20 paylines incorporated. There’s a bet level, which is able to be altered between one and 10, while the game’s coin value is also changeable between £0.01 and £1.00 per line. This provides an overall maximum wager of £200 per spin. Furthermore, you’ll be whisked away to a tropical island as you listen to the sound of the water and the tweeting of birds in the background.

Beach has two different wild symbols. One is a washed up piece of wood, which can appear on reels one, two, four and five, and this acts as a standard wild, substituting for other symbols to make a winning combination. The only exceptions to this are the scatter and Octopus Wilds.

The Octopus Wild, represented by a pink octopus of course, only appears on reel three. Like the standard wild, it does stand in for other symbols to create a win, but it also has the ability to swap the positions of any two adjacent symbols in order to create the highest possible win. Furthermore, all Octopus Wild wins are doubled.

Finally, the message in a bottle acts as Beach’s scatter symbol, and these trigger the freespins, or in this case, free waves mode. Spinning three scatters will provide you with eight free waves, four will give you 16 free waves and five will provide a total of 24 free waves.