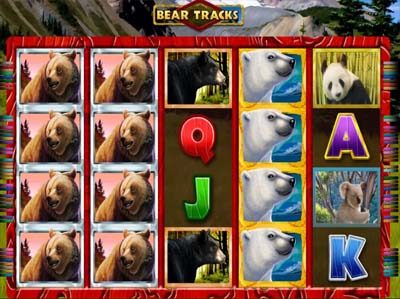 Bear Tracks is a slot machine by software provider Novomatic. It centers on the theme of nature and wildlife and we can’t help but marvel at the exact choice of symbols the developers have opted for. The backdrop depicts a very scenic view of snowcapped mountains. There’s no actual music however, just a kind of short, generic clump of sounds that’s audible as you spin the reels. You will probably recognize it if you have played other games by this developer before. The symbols picture the regular low value symbols presented by playing cards, each in a unique color. Starting with 10 they range through J, Q, K to A. And following them are several different bears – some probably less expected than others. These are the koala bear, the panda, a black and a brown bear, and last but not least – a polar bear. Note that this game has an Ultra Stacks feature, so all of these bears can appear stacked on the reels.

The layout is the standard with 5 reels and 4 rows with a 40 paylines. The paylines are fixed, so you will only be able to play around with the betting amount. Stakes span from 40p per spin up to £100 per spin. The RTP is pretty average for games from this developer at about 95%.

The Bear Tracks logo is the game’s Wild symbol and also the one offering the highest payouts. By landing 5 of a kind you can score a win of 500 times your total stake. In addition, the Wild symbol can also substitute for any of the regular symbols to contribute towards winning combos. There’s only symbol that the Wild can not replace in this game and that’s the Bonus symbol.

What’s more, on your last freespin you will have the opportunity to retrigger the freespin for an additional 15 freespins. You can keep on retriggering the feature up to 10 times for a maximum possible amount of 150 freespins! Furthermore, this slot also features a Gamble side game. It will allow you to double your winnings up to several times as you guess the color of playing cards. Each correct guess will double your amount, whereas a wrong one will end the feature and you will forfeit your winnings.

Bear Tracks is actually a fairly entertaining slot game, despite the lack of variety in bonus features. In fact, it’s the way the developers have structured the bonus that keeps gameplay so enticing.