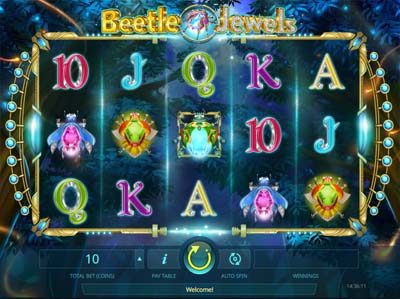 Beetle Jewels is a charming online slot game by software developer iSoftBet. It centers on a unique theme and brings players to an enchanting night realm of fireflies and glowing lights. The title here is pretty descriptive and most of the symbols on the reels are, indeed, shiny jewels in the form of beetles. You will be able to tell them apart both by size and coloration. The smaller ones without a frame are of lesser value than the two larger ones that each has a square frame around them. There are lower value playing card symbols here as well – all in the same unique style to fit the theme. They include A, K, Q, J and 10. And a peaceful soundtrack seals the atmosphere. 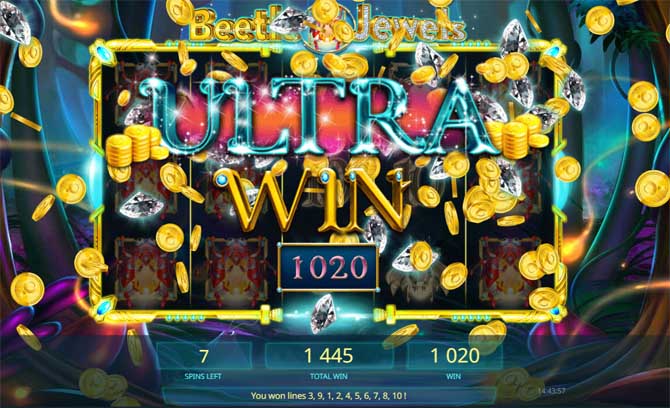 As far as the layout goes, it features the regular grid of 5 reels and a total of 3 rows. The total number of paylines in Beetle Jewels amounts to 10 and they are fixed. This means you won’t have the option of playing with less. Bets can start rather low, but the overall betting range isn’t a large one. Thus, you can wager anything from 10p per spin up to £10 per spin. Players can count on an average RTP of 95.5%.

Beetle Jewels only boasts a single special symbol, but it’s a two in one of sorts. It is the Scatter symbol in this game and it is by far the most picturesque of the insect formed jewels. Aside from being a Scatter, it also acts as a Wild symbol. As such, it can replace any of the other symbols to help create winning sequences. There are no exceptions as to the symbols that the Wild/ Scatter can substitute for. 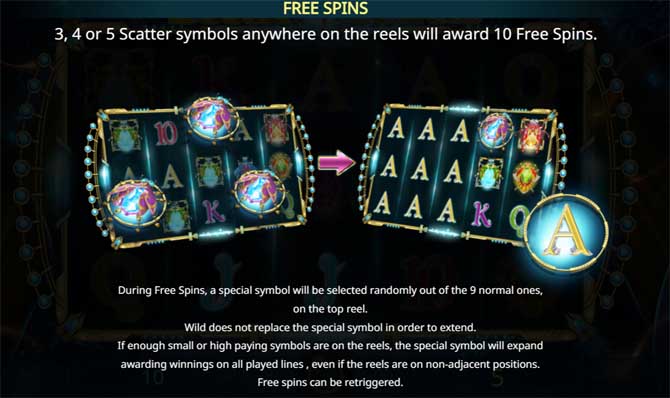 However, as this is also a Scatter, it is responsible for triggering the single bonus features in this slot game. And you can do that by landing at least 3 Scatters anywhere in sight during the same spin. This will trigger the freespins bonus feature, awarding you a total of 10 freespins. But before the freespins start, one symbol will randomly become a special symbol.

This will be the only symbol that the Wild will not be able to substitute for. But there’s more to it than just that. Whenever you land enough low or high paying symbols on the reels, the special symbol will then expand and grant you winnings on all paylines! And what’s best, the symbols don’t even have to be on adjacent reels. In addition, you will also have the opportunity to retrigger the feature and gain even more freespins. All you have to do is again land 3 or more Scatter symbols anywhere in sight and you will receive another 10 freespins.

Beetle Jewels is a fairly simplistic slot game, making things even simpler by combining two special symbols in one. However, that’s not a bad thing. In fact, we liked this slot and it’s certainly been a treat to look at. If you are a fan of popular slot machines like Book of Dead and Book of Ra, you will definitely like this one as well. The expanding special feature symbol is very similar to what you find in those two slots. A very well made slot by iSoftbet with the possibility of big wins in the bonus feature.