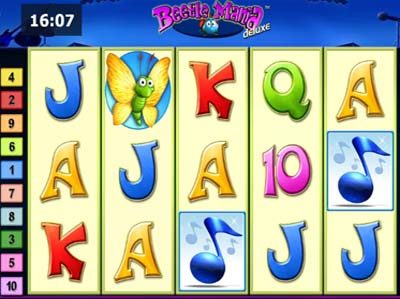 Here’s another great slot by Novomatic – Beetle Mania Deluxe. It’s quite entertaining, what with dancing bugs and cheerful jazz tunes (and you thought you’ll be getting the Fab Four). On a more serious note, the machine is overall good, with an interesting bonus feature and a potential for some massive winnings.

In a nutshell, this is a 5-reel machine with 10 paylines total. The minimum amount in real money you’re able to stake per line and per spin is 10p, while the maximum is £50.00. Additionally, the number of paylines can be adjusted by the player.

Special Features
The basic symbols are, as with most slots, card symbols. Here, these are tens, jacks, queens, kings and aces. There are also some symbols unique to this machine, which quite liven up the mood, coupled with the musical background. There’s something really endearing and relaxing in seeing bugs dancing to and performing jaunty jazz jingles. There’s a snail, a butterfly, and a caterpillar, as well as a bee, which is the wild symbol, and a musical note, which plays the role of scatter. There’s also a ladybug, which is a special kind of special symbol (more on that shortly).

As far as the bee is concerned, it pretty much performs all the roles of a wild you’ve come to expect – it stands as a substitute for any other symbol (save scatter), in order to complete the winning combos, and it can also have its very own winning combos. Speaking of which (wild winning combinations), if you manage to land five bees on an active payline, you will get 500x your initial stake.

As already mentioned, the bonus feature is of particular interest. The way you trigger it is by landing three scatter symbols on consecutive reels. This gets you ten freespins, and a chance to win the jackpot. It is somewhat limited, in the sense that you can’t get any further bonus spins while in the bonus feature, but the jackpot makes it more than worthwhile (assuming you’re lucky enough). Here’s where the ladybug comes into play. Normally, this symbol appears even during basegame, solely on reel 3, and does nothing more than ruin perfectly viable combinations. However, if the ladybug appears while you’re in the bonus feature, this doubles all your freespin winnings. Better yet, it can appear more than once during freespins, significantly boosting your balance. All the coins you win during the Bonus feature are accredited to your account once you get out.

Another interesting feature, although not a bonus round per se, is the Gamble feature. In short, the game gives you the opportunity to bet your winnings on red or black. Guessing right means doubling your coin, whereas guessing wrong will result in a clean slate. It’s a nice opportunity, but seems just too chancy.

Summary
On a balance, Beetle Mania Deluxe is a well-conceived and better-executed slot, an entertaining way to while away your time. It could use more Special Features, which would make it even more fun to play. On the other hand, the potentially massive jackpot definitely makes it worth a spin.