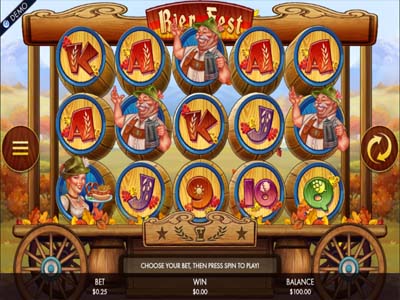 This game from Genesis Gaming brings all the wonder and merriment of a Bier Fest right to your screen. Oktoberfest is a time of celebration and fun, and all the enjoyment is very nicely captured in this product, with the sound of birds chirping in the background accompanying your gameplay. In addition, every round will provide you with the sound of an accordion playing to give you the full Bier Fest experience. The reels are filled with various different kegs, some of which contain standard slot game letters like A, J and K, and others which feature buxom serving girls or jolly drinking men.

There are five reels and three rows included in the game, while 25 fixed paylines have also been incorporated. The minimum coin value available to select in the game is £0.01, while the maximum stands at £10.00 per payline. Therefore, all players are able to place a maximum bet of £250 per spin. The game also has a theoretical average return to player (RTP) rate of 95%.

The bier stein acts as a scatter symbol in this game, and this appears on reels two, three and four only. Three of these trigger the freespins game.

In addition, there is a wild symbol included in Bier Fest, which substitutes for all symbols, except for scatters.

The barrel wild symbol appears only on reel three, and is separate to the standard wild. When this appears anywhere on the middle reel, it will transform the entire reel into wilds. It may also randomly fill in either reels two, four, or both.

Reels two and four are also host to Bier symbols. When this lands in a reel position, it will be drank, revealing a symbol underneath. Alternatively, it may reveal a prize.

Finally, a wild pig landing on reel one and a pretzel appearing on reel five on the same row will trigger the wild pig racing feature. This sets three pigs racing across the reels, one on each row. Each of them will leave wild symbols in random positions.

Bier Fest is a fun, cheery and wonderfully made game that is cram-packed with special features.