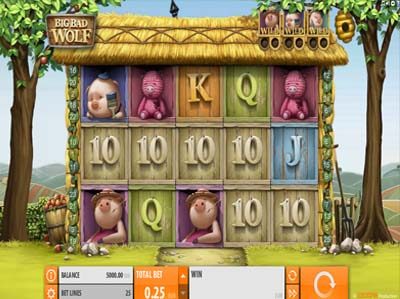 We all know the tale of the three little pigs and the big bad wolf, right? Well, Quickspin have certainly ensured that nobody ever forgets the story by presenting gamers with this slot offering. It’s all been designed on a very visually pleasing layout, featuring the pigs’ straw house in front of a bunch of fields. It’s within the straw house that the reels exist, and the symbols are incorporated there as well. These icons exist in the form of the regularly seen A, J, K, Q and 10 to begin with, as well as four medium win icons in the form of the three pigs and a pink teddy bear-like pig.

The game is offered up on a five reel and three row interface, and Quickspin have also incorporated a total of 25 separate pay lines. These cannot be customised in any way, but players do have the option of adjusting the amount of the bet that they placed per spin, and this is done by using the up arrow next to the total bet box. This allows you to change your wager between the minimum of £0.25 and £125 per spin, and you also have the option of clicking the ‘Fast Play’ box, which will reduce the amount of time it takes for the reels to spin.

You’ll see that one of the special features of this game comes into effect once you start forming wins. This sees the icons included in the win disappear from the screen in order to make room for new ones. If further wins are created, this process starts again. Every second win will turn a pig into a wild symbol as well!

And speaking of wilds, there’s also a standard wild incorporated into Big Bad Wolf, which is represented by a beehive. This substitutes for all other icons on the reels, except for the Multiplier Wild, Freespin scattter and Free Spin progress symbols, in order to form a win.

The freespins icon is represented by the wolf, and three or more of these showing up on the reels will activate 10 freespins, while three of them appearing during the freespins round provides an additional 10.

And don’t forget about the ‘Blowing Down the House’ feature. With this, you simply need to collect the moon symbols to help the wolf destroy the house. Three of them collapses the wood house and awards two additional spins.

We enjoy games that bring reminders of our childhoods to the screen, and this one certainly caters to that, including great graphics and overall gameplay. With a very high RTP of 97.34%, it is also one of the best slots to play in regards to value. Check out our RTP database for more high rtp slots.