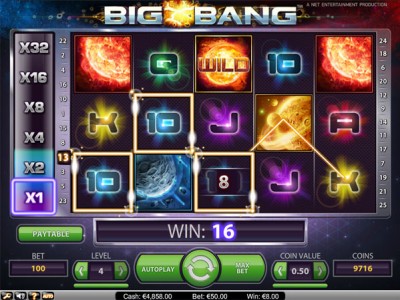 So, are you a believer of the big bang theory? No, not the television show, the actual theory of how our planet was created. Well, if you’re a fan of space, planets, stars and that all important scientific knowledge, you’ll have a blast with the Big Bang slot game. The game naturally has reels filled with symbols of various differently coloured planets, complete with surrounding moons, as well as a vibrant star and inclusive asteroids. There’s also a very apt piece of background music to take you along your cosmic journey.

Gamers of the Big Bang product will find five reels and three rows make up the interface, while a total of 25 lines are included alongside. The game’s coin value is able to be altered between £0.01 and £0.50 per line, while the bet level can be switched from one up to four. These elements combined allow a total overall wager of £50 per spin to be placed.

In addition to such a great balance boosting feature, there’s also a wild symbol included in Big Bang as well. This is represented by a pulsing, vibrant star, and the icon will stand in for any other on the reels to create a winning combination – and even these will increase the multiplier meter. An extra perk on top of a perk!

These features may seem to be fairly minimal, but they both amount to a very pleasing and exciting game.