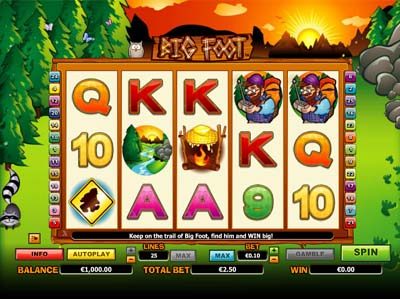 This product offers up a game based on a mythical creature that stomps across the land, seeking out lost and disoriented hikers and ramblers. As such, it provides a wonderful backdrop of forests, rocks, and a distant sunset. Its reels are filled with imagery relating to such a theme as well, from a backpacked walker tampering with his radio device, to a lit fire which is in the process of barbecuing some corn, as well as an icon of a beautiful stream, and another of a danger symbol for the creature itself. Each of the symbols included in this game are also amazingly animated, providing an entertaining experience.

There are five reels and three rows included in the layout of this one, as well as a total of 25 pay lines. These lines are able to be customised, should you feel the need to lower them, and players also have the option of switching around the amount that they bet per spin as well. This is done with the plus and minus buttons, and the bet ranges from £0.02 up to £4 per active line. Therefore, all players are able to place a maximum overall wager of £100 per round.

The wild icon in this game is represented by the monster himself, and he will appear on reels two, three and four only. If he should show up, he’ll substitute for all other icons on the reels in order to form a win, with the only exception being the scatter icon.

And speaking of this symbol, it is represented by the huge footprint. These pay out wherever they come in to view, and three or more of them appearing will trigger the freespins round. A total of 10 freespins are provided in this, and further freespins can be triggered during it.

Finally, there’s also a ‘Big Foot Feature’, which is awarded when the wild icon appears anywhere on reels two, three and four at the same time. You need to select from any of the pairs of eyes in the forest scene. You have three chances in which to find the creature, with each selection winning you a prize. Finding Big Foot awards an even bigger prize.

This is a great product from NextGen Gaming, offering up an entertaining and thoroughly compelling product to spin the reels of.