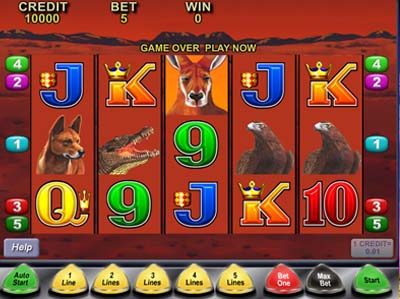 A wildlife theme takes front and centre precedent in this game from Aristocrat, and it appears to be featuring animals from the Australian outback. Therefore, you’ll find icons of kangaroos, crocodiles, dingos, eagles and warthogs to send spinning. Accompanying these are the standard K, Q, J, 10 and 9 icons. There isn’t a soundtrack included in the game as such, unless you count the arcade-sounding noise that streams out whenever you form a winning combination.

The game has five reels and three rows worth of a layout, and a total of five pay lines are also included. The amount of these that you wager on can be selected from the bottom. You’re only able to bet a single coin per line on every spin as well, so if you have the maximum five pay lines active, your min wager will be five coins, or £0.05 per round.

Scatter icons exist within the game, being represented by the sole dark tree against the setting sun background. Spinning two or more of these will multiply your wager, with five of them incorporating a 50 times multiplier.

The kangaroo acts as the game’s wild icon, and this will substitute any other symbol on a winning pay line. When one or more comes into play as a wild, the freespins feature will be triggered. A total of five freespins will be awarded for every lit pay line triggering the feature. During this round, if another wild symbol appears, a further five freespins will be granted.

Big Red is a standard slot game overall, with freespins and wild icons included. There’s very little to appeal to players in terms of soundtrack or overwhelming storyline and graphics. However, if you enjoy the simpler products, this one will certainly cater to you.