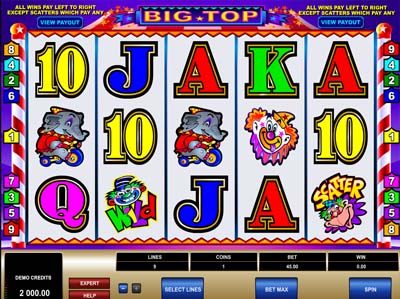 You’ll find a very classic video slot game available to play in the form of Big Top, featuring a very 2D set of graphics and colourful display. However, despite this being the case, it’s still a very intriguing and entertaining game to play. Taking on the circus theme, the reels are filled with icons related to such. Therefore, you’ll find symbols of a seal, an elephant, a clown and a lion in a tamer’s hat. They are joined by the regularly seen A, J, K, Q and 10 icons, as well as one of the game’s own logo.

Developer, Microgaming, have ensured that the game provides a standard layout on the whole, offering up an interface of five reels and three rows. These are joined by nine different pay lines, but you can adjust these with the use of the ‘Select Lines’ button. Furthermore, you can alter the bet per round by using the plus and minus buttons at the bottom. This allows you to risk between £2.25 and £45 per round, and this amount can be reached by using the ‘Bet Max’ button.

There are only a couple of special features included in Big Top, and these begin with its wild symbol. As a wild, this replaces any other icon on the reels, with the exception of the scatter icons.

And speaking of the scatter icon, this is represented by the monkey dressed up like a clown. Scatters pay out wherever they appear on the reels, with five of them coming in to view multiplying your total bet by 50 times.

While the game might not have such up-to-date features as many other video slots, it’s still entertaining enough, thanks to it’s general theme, overall game play and vibrancy.