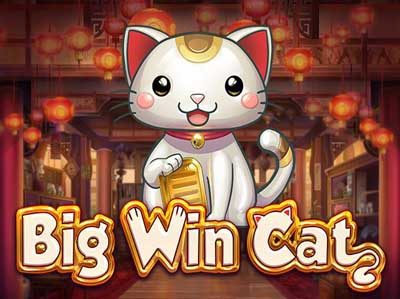 Do you like Asian-themed slot games? What about classic slot machines? Now, what about if you could combine the two, for a new kind of gaming experience? Well, software manufacturer Play’N Go appears to have done just that with their adorable online slot game Big Win Cat. This title boasts high quality graphics, which allows it to masterfully pull off the almost childishly cute visuals. The backdrop takes you to the inside of an Asian antique or gift shop, and creates this very cosy atmosphere. And aiding it in this is a similarly tranquil and peaceful backing track. Note the game title above the reels, as well. The ‘C’ in Cat has ears that wiggle occasionally and the ‘T’ has a tail that it flicks from time to time. And if you keep looking you will also notice the paws in the ‘W’ of Win. 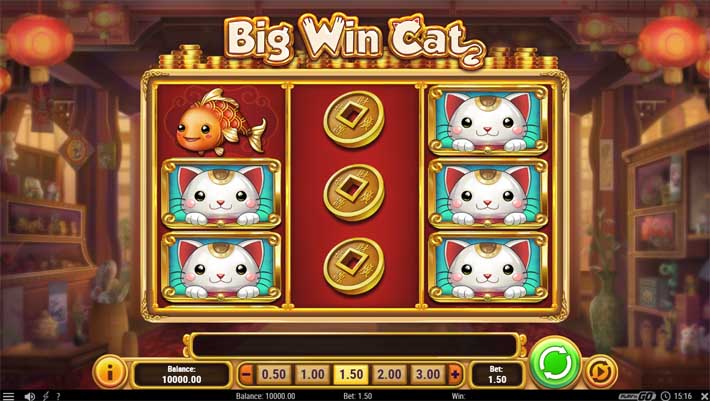 All the symbols in Big Win Cat have to do with this theme – no exceptions. They start off with the lower value gold coins, with the characteristic square opening in them. Next are the golden bell symbols, kind of like what you would tie to a cat’s collar. Then we have green pouches, following which are the pink handheld fan icons. And after that we have some peculiar looking cat toys, which in turn lead us to the game’s higher value symbols. These include the very happy tortoises and the equally joyous pig symbols. Then last but not least are the orange Koi fish and – you guessed it – they, too, are smiling as much as they can. The layout in Big Win Cat is where the retro theme shines through. It features a total of 3 reels and 3 rows, with 5 paylines. The paylines, however, are fixed, so you will not be able to regulate them. Then again, stakes have a very liberal range in this title. They span from a minimum of 5p per spin and soar up to a maximum of £100 per single spin. As for the RTP in Big Win Cat, you can count on about 96.15%.

The cute kitty cat symbol on these reels acts as the game’s Wild. It is also dramatically more lucrative even than the koi fish symbol, making it the highest value symbol on these reels. Furthermore, you will find that the Wild can land in any position, on any of the three reels. But more importantly, it will be able to replace any of the regular symbols on the screen. And in doing so, the Wild can contribute to winning combinations and help boost your winnings. However, this is the only special symbol that Big Win Cat boasts. There are no Scatters, no Bonus symbols and no mystery symbols. 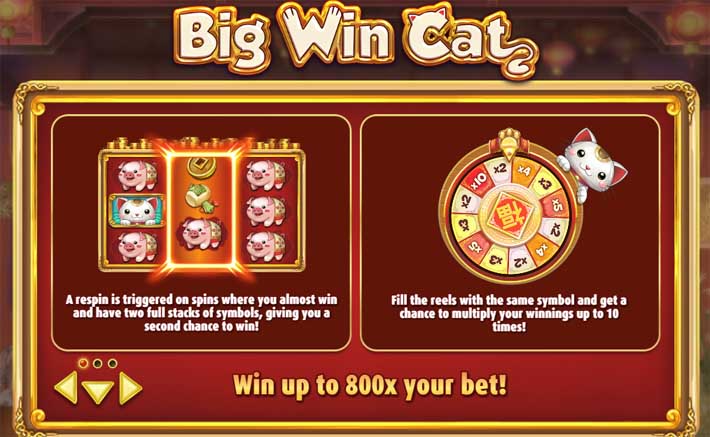 And if you can fill the whole screen with symbols of the same type, you will not only pocket a handsome cash prize, you will also activate the game’s Wheel of Multipliers feature. You will spin the wheel to reveal your multiplier, which will be applied to your winnings. The multiplier can range from a minimum of 2x up to a maximum of 10x! So, potentially, you can win a grand total of up to 800 times your stake with the help of this feature during any spin. Not bad for a classic slot, right?

However, these are the only two special features you can count on in this online slot game. Don’t expect any of the conventional bonus rounds, such as freespins, pick me games and the like. Nevertheless, the re-spin feature, as well as the Wheel of Multipliers can prove fairly rewarding for players. Not to mention that they do keep you on edge all throughout gameplay as well.

Big Win Cat is certainly an unusual offering and we really enjoyed the way the developers merged the classic slot machine vibe with an Asian theme. If you are a particular fan of Asian themed slot games, you will be sure to appreciate this just as much. The game isn’t entirely retro, though, as it does come with its set of special features. And although they are still rather humble, they can offer pretty good prizes. As far as the variance of this title goes, we would say it’s a solid medium variance offering. Thus, you will be able to benefit from satisfying wins at evenly spaced intervals.