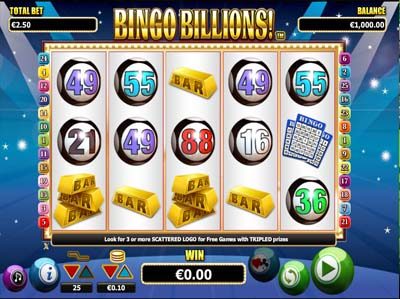 “BIIIIIIIIIIIIINNNNNNNNNNNNNNNGOOOOO!”, is the sound you’re greeted with upon loading this game up from NextGen Gaming, and, let’s face it, who doesn’t appreciate a few rounds of bingo? And in that respect, what could be better than merging the thrills and excitement of a bingo game with the intrigue and enjoyment of a video slot? It’s a win win situation, right? Because of its theme, this product presents you with reels filled with numbered balls, as well as wads of cash, bars of gold, bingo cards and, what would apparently be a very warped caller.

There are a total of five reels included in it, as well as three rows, and these are all accompanied by 25 separate pay lines. These are able to be customised in order to suit your own personal preferences, and players can also change the wager amount per line around as well. This starts from its minimum of £0.01 and increases up to a maximum of £2, so will therefore present you with the opportunity to place a maximum overall wager of £50 per spin.

The bingo caller icon acts as this game’s wild symbol, and in doing so, he’ll substitute for all other icons on the reels to form a winning combination, with the exception of the scatter symbol. Should you manage to spin five of these symbols onto an active pay line, you’ll receive a maximum pay out of £5,000.

The game’s scatter icon is represented by its logo, and these pay out wherever they appear on the reels. Should three, four or five scatter icons appear anywhere on the reels, you’ll be on the receiving end of 20 freespins, and all prizes will be tripled during the round as well.

Finally, NextGen have also added a gamble feature into the game, which is available after every winning combination formed in the base game. This allows you the chance to double your winnings by guessing the colour of the next playing card to be turned over in a side game.

Successfully merging bingo and a video slot is what this developer has done in this game, and there are few developers out there who can say the same. It’s graphically pleasing, has a decent amount of special features, and provides entertaining game play along the way.