Birds on a Wire 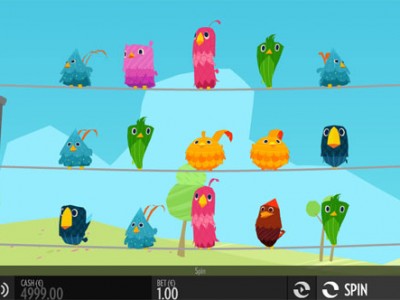 Birds on a Wire Slot Review

If you’re looking for a game that’s full of entertainment, Birds on a Wire is certainly it. The game design should probably be quite obvious from its title, as the “reels” aren’t specifically reels. With every spin, you’re moved along to a new section of three electric wires, and a mass of birds will fly in to perch along them. Five will land on each wire, providing you with a five reel, three row layout. For every winning combination made, the birds will find themselves being the victim of an electric shock, forcing them to explode and make way for a few more birds.

There are 17 fixed paylines included in the game, and the wagers that you’re able to choose from start at the minimum of £0.10 and increase up to the maximum of £100 per ‘spin’. There’s also a quirky musical ditty included, and the unfortunate exploding birds will make a mildly entertaining squawk before disappearing in a flush of feathers.

Birds on a Wire offers up a multiplier that increases with every winning combination from times one to times five. As mentioned, every time the birds explode, new ones drop in to their place to fill them. Therefore, you’ve got the chance of creating several consecutive wins.

The game also features a wild symbol, represented by a big black bird, which will stand in for any other symbol on the reels, except bonus symbols.

The bonus symbol is the inclusion of a cat hidden underneath a cardboard box. Get three of these scatter symbols on the wires for 10 freespins, and any additional bonus symbols will provide two more freespins, up to a maximum of 34.

During the freespins round, the multiplier meter starts from times four, up to times eight, times 12 and the maximum of times 20. And when all freespins have been completed, Inwinity Spin is activated. This will set re-spins in action and they will continue until a win is achieved.