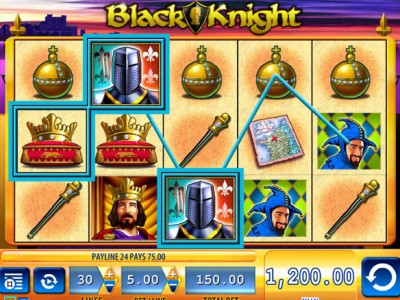 Black Knight has all the makings of a medieval fairytale. There’s the castle setting, which features both a king and a queen, as well as a smiling jester. There’s also various forms of royal accessories that appear on the reels, such as the king’s crown, an orb and a sceptre. There isn’t really any relative soundtrack to the game, although a musical ditty does play with every spin of the reels.

The game offers up a fairly standard five reel, three row layout, with 30 separate paylines to wager on. These can be customised if you prefer to bet on less, with the minimum wager starting at £0.01 per line. This can be maxed out to £5.00 per line, enabling you to place a maximum overall wager of £150 per spin. You’ll also find that you’re able to set the reels of spinning automatically for a total of 30 times.

The Black Knight himself acts as the game’s wild symbol, and he will stand in for any other symbol on the reels in order to make a winning combination. This particular symbol only appears on reels two, three and four.

And, if you’ve ever played chess, you’ll know that the piece representing a knight is a horse’s head. Well, this particular icon represents the game’s feature symbol, and three or more of these appearing scattered on adjacent reels provide you with seven freespins. Should a wild symbol appear during the freespins round, it will expand to fill the whole reel and is held in place for the remainder of the freespins.

Overall, you’ll find that while Black Knight doesn’t have an overwhelming amount of additional features, it will provide an entertaining enough game, especially for those players who are interested in medieval times.