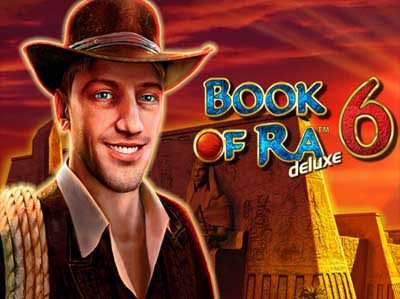 Book of Ra Deluxe 6 is a new and improved version in the Book of Ra slot game series by game developer Novomatic. If you are familiar with previous games in the series, you will recognize much in the layout and design of this slot. For example, the symbols still feature the characteristically styled lower value playing card symbols: A, K, Q, J and 10. Furthermore, the remaining symbols are also the same as in other versions of this game, as well. They include the scarab beetle, the statue of the Egyptian goddess Isis, the pharaoh sarcophagus and the male adventurer. They do, however, look a little bit more sophisticated, as does the backdrop. You will be looking at the dark inside of a pyramid, with various ancient engravings on the walls.

As far as the setup goes, things are slightly different. Instead of the customary 5×3 grid, you will have 5 to 6 reels and 3 rows. The slot offers 10 paylines in total and stakes range from 20p up to £50 per round when using 5 reels. If you decide to use the Extra Bet feature and activate the additional 6th reel, bets will span from 40p up to £100 per spin. The RTP is set at 95.03%. 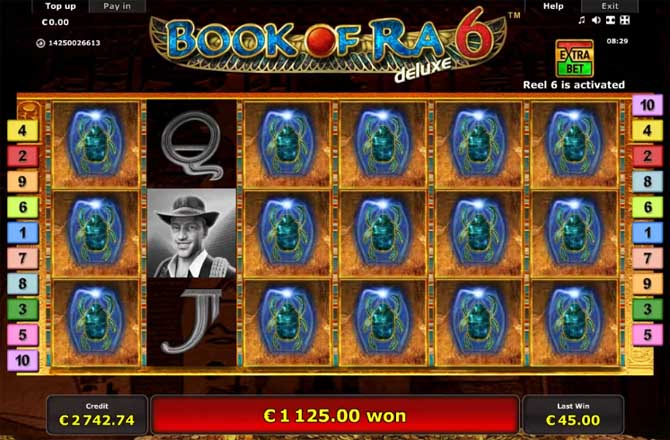 The Book of Ra is the game’s Wild symbol, just like in the other slots in the series. As such, replaces any of the other icons to help create winning sequences. What’s more, though, the Book of Ra is also the Scatter symbol here.

In addition, it is responsible for triggering the single bonus feature – the freespins. In order to activate it, you will be looking to land at least 3 Scatter symbols in any position on the reels during a spin. This will reward you with a total of 10 freespins. But that’s not all yet.

Before the freespins start, one symbol will randomly be chosen to become an Expanding symbol. Whenever it lands on a reel, it will expand to cover all the positions on it. If you land several of these during a spin, then they will cover the entire screen. Naturally, the higher the value of this symbol, the higher your payouts will be. And this is something worth considering, as filling the screen with one of the higher paying symbols can make for some terrific wins.

Furthermore, you can also retrigger this feature by landing another 3 or more Scatter symbols anywhere on the reels. This will reward you with another 10 freespins, for a grand total of 20 freespins. 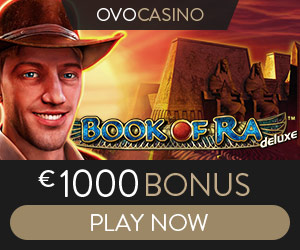 Book of Ra Deluxe 6 offers more than its older counterparts, and not just in terms of visuals. It has become hugely popular amongst many slot players, mostly because of the potential it has for massive wins. The addition of the extra reel increases the size of the wins, as you now can get 6 full reels of expanding symbols in the free spins feature. If you for example land 6 explorers in the feature, it will pay out an incredible 7500x your total bet. This is of course a rare example, but it shows you the massive potential this slot machine has.

Aces are considered by many to be the best symbol you can get as the expanding symbol in the feature, not because it is the highest paying one, but because it appears quite frequently and pays good. It is not uncommon to land 6 of them on a spin, giving you a full screen of aces which pays 375x your bet.

And as with most Novomatic slot machines, it is pretty common to get a re-trigger in the bonus. So while it can be a pain to trigger the bonus in the first place, re-triggers are pretty common. We would like to round up with a little advice at the end. Book of Ra Deluxe 6 is a very high variance slot machine, so you should consider this and adjust your bet size accordingly when playing it as it can eat your money in a heart beat if you don’t get the bonus.