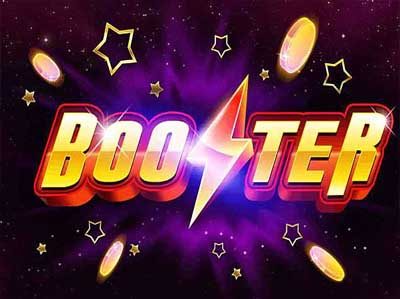 Booster is a classic themed online slot game by software manufacturer iSoftBet. It features a cosmic, intergalactic setting, where you get the vibe of slowly drifting through outer space. There’s a nice purple hue, matching the neon blinking purple frame surrounding the reels. The background of the reels themselves is transparent, but darker so you can still have a good look at the symbols, as well. There’s also a continuous kind of flowing soundtrack that really goes well with the whole space theme. And during winning combinations you will hear it pick up the pace and gain more of a vintage slot machine sounding. As for the graphics quality here, it’s quite satisfying, but not too fancy. There aren’t any over-the-top 3D or HD graphics, elaborate animated sequences or anything like that. But that’s also very well in line with this genre. 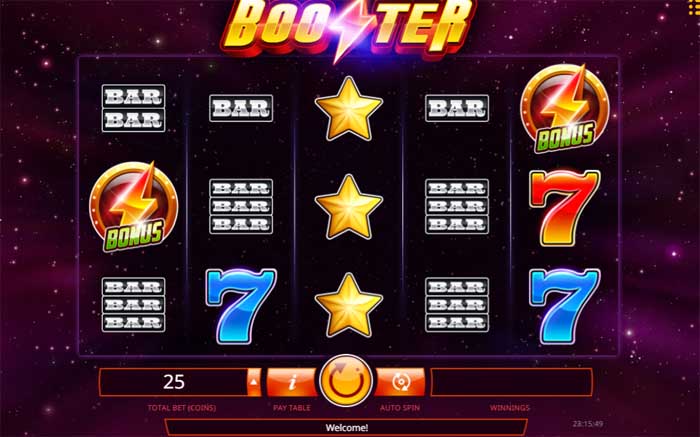 The symbols here, except maybe for one, are all the most typical vintage slot machine icons and you will be sure to recognize every last one of them. They begin with the lower value single, double and triple BAR symbols. Following them and further increasing in value we have the golden star symbol. Then, there is the blue lucky 7 icon, after which is a rather dramatic increase in value for the red lucky 7. And last but not least we have the most lucrative symbol on these reels worth up to a whopping 2,000 coins – the pink diamond icon. As for the layout in Booster, it’s a bit more modern than what a classic slot game would imply. It features your common grid of 5 reels and 3 rows, with a total number of 25 active paylines. The paylines here cannot be adjusted, nor can you regulate their number. Likewise, the stakes also mirror this and start a minimum of 25p per spin. And the largest amount you will be able to wager on these reels is a total of £25 per single spin. The RTP here isn’t all too high, though, at an average of about 95.6%.

Booster doesn’t offer players the benefit of a Wild symbol that would be able to replace any of the other symbols in sight and thus offer a helping hand in creating winning combinations. This may come as somewhat of a disappointment to some. But this is, after all, a classic themed online slot game. And typically these aren’t really big on special features. With that in mind, you might also be thinking that there are probably also no other special features in store either. And that’s where you would be wrong.

As a matter of fact, Booster features its very own Bonus symbol, which is something worth appreciating. You don’t often come across instances like this within this genre. The Bonus symbol pictures a lightning bolt on something like a round shield. It doesn’t offer any payouts of its own during the base game. But it can appear in any position on the reels. And more importantly, it will also be responsible for triggering this game’s single special feature. But in order for that to happen, you will first need to land a minimum of 3 of these Bonus symbols anywhere on the reels. This will trigger the Bonus game and you will enter a new screen with a different set of reels.

During this special feature you will need to press the stopper whenever you think it’s time to. At that point, what out for where the light lands. There are 8 different prizes that it can potentially land on and, thus, award you one of them. The available ones include, for example, an instant cash prize of 6,000 coins. Alternatively you can also win freespins and the possible options here are either 15 or 100 freespins. In addition to that you can also separately gain a certain number of freespins with a certain multiplier. There are four different possibilities for this. You can get 5 freespins with a 5x multiplier on your winnings, or 10 freespins with a 2x multiplier. Another option here also includes 10 freespins, only with a 3x multiplier. And the final freespins offer includes 50 spins with a 2x multiplier on your wins. Last but not least, you can also land on the Mystery Prize, which will award you a random bonus. Note that you won’t have the opportunity to retrigger the freespins bonus rounds.

Booster is somewhere in the medium to high variance range, which means that you can gain some pretty decent wins from it. Of course, the larger prizes will be waiting in the bonus feature. However, triggering that bonus feature is a different story and may not prove easy. In addition, it may not seem very exciting due to its straight forwardness. Nevertheless, all in all this is a refreshing slot with decent features and pleasant visuals. Wins come at very agreeable intervals during the base game, which is great.