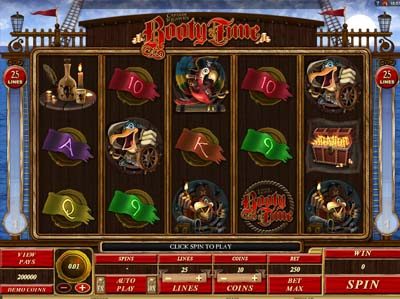 It’s time to sail the high seas and collect as much booty as possible. That’s in reference to buried treasure, not to a booty call! You see, this one will take you to the top deck of a pirate ship – which seems to be under the operation of a band of seafaring birds. The great thing about this game is the sea shanties that are played whenever you spin the reels. They really give an extra bit of atmosphere to your game play. As far as the icons of this one are concerned, you’ll find the regular A, J, K, Q, 9 and 10 imagery, and these symbols are joined by one of some pirate’s grog, as well as the three birds who are captaining the ship – the paarrot, the toucan and the eagle.

The layout of the whole game is presented to players on a five reel and three row interface, and the developer, Microgaming, have included a selection of 25 different pay lines into it. These can be altered by either sliding the circular block up at either side of the reels up and down. Alternatively, you can use the plus and minus buttons in the ‘Lines’ box. You can also change the amount that you wager per spin, and this is done in the first instance by adjusting the value of a single coin between £0.01 and £0.10. You can also switch the amount of coins per line between one and 10, which gives you the chance to place a maximum overall wager of £250 per round.

The logo of this game is what acts as its wild icon. As a wild, it will stand in for all other symbols on the reels in order to form a win, with the exception of the scatter icons. When one or more of these substitute in a win, the highest win is paid, and the winning combination including this symbol will double the prize.

Scatter icons are represented by the gold coin-filled treasure chest. Scatter wins are multiplied by your total wager placed. Three scatter icons showing up anywhere on reels one, three and five will activate the ‘Booty Bonus Free Spin Feature’. You simply need to choose a scatter icon, and this will reveal the number of picks you have in the next round. Treasure chests will appear on a second screen, and it is here that you have to select chests until you have used all your ‘picks’. The chests reveal the amount of freespins you have.

This game is one of the better pirate-themed games available to play. It really incorporates the theme very well, and has intriguing special features to go along with this.