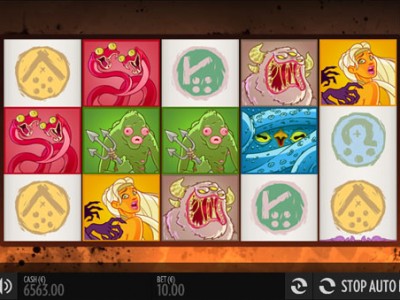 Børk The Berzerker has all the makings of a Nordic myth, with sea creatures and monsters adorning the reels. Runic symbols make up the remainder of the icons, and every spin will provide you with what can only be described as a mysterious viking-sounding war cry. Graphically, it’s a very pleasing game, with a great design and interface to play on.

And speaking of which, you’ll have a total of five reels and three rows to play on, as well as 225 fixed pay lines on top. There’s a selection of different wagers to choose from at the bottom of the reels, which start at the minimum of £0.10 and increase up to the very maximum of £100 per spin.

The symbol of Børk is the game’s wild symbol, and this acts as a stand in for all other symbols to make a winning combination, excluding the bonus icon. This appears on reels two, three and four only, and when it’s included as a combination on a winning payline, it will expand to cover the entire reel. This gives extra chances to create longer winning combinations or multiple wins across the paylines.

The game’s bonus icon is represented by the bald-headed, yellow-eyed enemy. Spin three or more of these on the reels and you’ll gain access to the bonus game of freespins. Three symbols provide 10 freespins, four provide 20 freespins and spinning five bonus symbols will give you 50 freespins.

Børk The Berzerker provides an entertaining game with a welcome freespins round and expanding wild symbol. It’s got all the usual Thunderkick attributes, as well as a very thematic soundtrack and setting. Finally, the theoretical return to player (RTP) of this game is 97.3%.