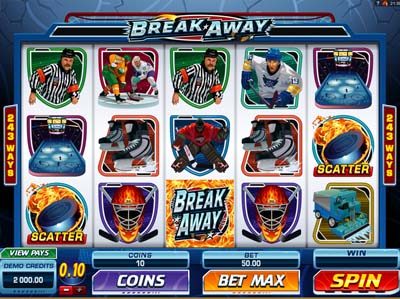 If you’re a fan of sports, or, more specifically, of hockey, then Break Away from Microgaming will be the perfect video slot for you to play. It features all the imagery of a thrilling hockey game, and it will drop you straight into the thick of the action – and this is further highlighted by the inclusion of a soundtrack that sounds as though it’s coming straight from the arena. There are various different symbols on the reels, with the lowest paying ones being of the hockey helmet, the ice pitch, a pair of ice skates, and the big vehicle which smooths the ice. Furthermore, there are five other character icons in the form of various players and the referee.

The game is played on a layout of five reels and three rows, which is a fairly frequently seen interface for a video slot. Not only that, but Microgaming has also included a total of 243 ways to win, and this is not able to be altered in any way. You can change the wager that you place per spin though, and this is done first of all by selecting the value of a single coin, which offers a range of between £0.01 and £0.50, while the amount of coins that you play per round ranges between one and 10. Therefore, a maximum overall wager of £250 is able to be played per spin.

There’s a wild symbol included in the game, and this is represented by the Break Away icon. This appears as a stacked symbol on reels three, four and five, and as a wild icon, it will substitute for all other icons, except for the the scatter symbol. Not only that, but there’s a ‘Smashing Wild Feature’ involved in the game, and this sees hockey players randomly crash into reels two, three or four, and this will turn a reel wild with a guaranteed win.

The scatter symbol of the game is that of the hockey puck, and should three or more of these show up in any location, you’ll trigger the freespins round. Three scatters provide 15 freespins, four scatter icons provide 20 freespins, and five scatters offer up 25 freespins.

Not only that, but the game includes something known as ‘Rolling Reels’. These can award multiple consecutive wins, and they will award up to a 10 times multiplier during the freespins round.

This game offers up quite a compelling product to play, especially if you’re a hockey fan. It’s special features are quite unique for a video slot, but it also incorporates several regularly seen video slot specialities as well.