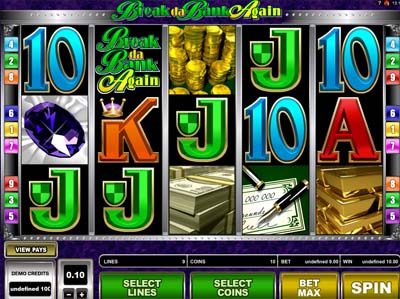 You’ve broken it once, now it’s time to do it all over again! Yes, the sequel to the original is here and ready to be played, offering up reels filled with icons of more cash, coins and cheques than you can think of. Alongside these are a selection of diamonds and jewels that would make the queen envious, as well as the regularly appearing A, J, K, Q and 10 icons.

The game offers up a layout of five reels and three rows, and has had a total of nine pay lines included alongside. Gamers are able to change the amount of lines that are wagered on, as well as the coin value. This is changeable from its minimum of £0.01 to the maximum of £0.25. Meanwhile, the amount of coins you use to wager with is also alterable from one through to 10, allowing for a maximum overall wager to be placed of £22.50 per spin.

And speaking of the freespins, these are triggered when three, four or five scatter icons, represented by the bank vault, appear on the reels in the main game. A total of 15, 20 or 25 freespins will be granted, depending upon the number of scatters appearing, and every vault icon appearing during this round will provide an extra freespin on top.

After every win, you also have the chance to gamble, which requires you to guess whether the playing card that is turned over will be red-suited or black-suited.

This game provides slots players with an intriguing game, and a follow up to an already popular product that provides just as much entertainment value. Break da bank again is also known for it’s big hit potential with the 25x free spins multiplier.